Mario Super Sluggers is an over-the-top baseball game that allows you to play as numerous characters from the Mario franchises. It is in the same vein as other Mario sports games, with many characters and levels from the series.

Mario Super Sluggers is a Mario sports game that was developed by Namco Bandai and Now Production and published by Nintendo. It is a direct sequel to the Gamecube game Mario Superstar Baseball which was released on the Gamecube in 2005. The game is similar to other Mario sports titles in that it features the Mario cast bringing a crazy twist to an established sport, baseball!

Being for the Wii the game takes advantage of the Wii remote in a manner that is most easily comparable with the Baseball game found in the original Wii Sports title. However if the player does not wish to play in this manner they can choose to play with the remote and nunchuck or the remote turned on its side.

In terms of gameplay it is again comparable to the baseball section of Wii Sports.

The game supports a variety of game modes and they are as such:

The standard sports game mode in which the player sets up a match with rules, players and locations of their liking and simply plays.  One of the features of this part of the game is the choice whether to play during the day or night, however the option to play during the night must be unlocked.

This mode is the "campaign" mode of the game and starts the player as Mario seeking to start his own baseball team. This is where the player will unlock new characters and stadiums for use in the game's other modes. The action is justified by a simplistic story in which Bowser is taking over baseball stadiums.

Players must hit the ball the a certain point on the field while other players attempt to catch it, if they are successful they become the batter.

A standard practice mode where the player can get more used to the game and its mechanics.

The game contains nine minigames some of which must be unlocked as the player goes through the game.

The ice reflections are pretty, but the roving blocks of ice will freeze outfielders with just a touch! The minigame for this stadium is Wall Ball.

After a win here in Challenge mode, Jr.'s room is replaced by a tougher stadium: Bowser Castle. You can play Graffiti Runner in this stadium.

If you play this stadium at night, then Bowser will greet him for a friendly game of baseball and if you're lucky enough to defeat his team, then you can try your hitting skills in Bowser Pinball.

A bonus game is played here: players take turns batting while everyone else tries to catch (and keep) the most coins by the end of the game.

The DK crew is in full effect with a cool jungle stadium and a roster that includes Donkey, Diddy and DIxie Kong.

The grubby garlic-gobbler has a stage that is part Vegas and part carnival, and looks best at night when it's all lit up. Gem Catch is played here.

True to Yoshi's cuter-than-cute style, his stadium is extra bright and cheery, and is surrounded by themepark rides.

This is the game's most basic, classic ballpark, good for a straightforward game of hardball and this is where the minigame Bob-omb Derby is played.
Mario Super Sluggers Review
MLB 06: The Show Major League Baseball 2K8 MLB '98 MLB Power Pros 2008 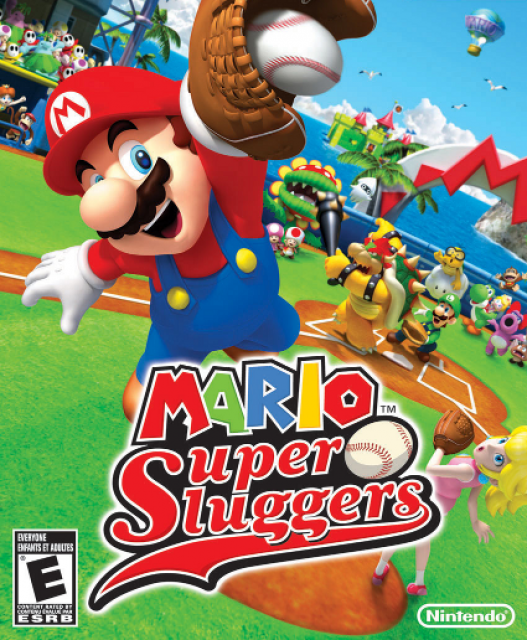