Backbreaker is the debut game from NaturalMotion, developers of the Dynamic Motion Synthesis technology found in Euphoria. The title features on-the-fly simulation of tackles, rather than using animations produced by key-framing or motion capture.
Xbox 360 PlayStation 3

Backbreaker was developed NaturalMotion for the Xbox 360 and PlayStation 3, and is their take on football for those in need of the "pick-up-and-play experience". The game has a high focus on tackles and a third-person camera angle similar to that in Electronic Arts' Skate series. Developers positioned the camera for gameplay in order to make the player feel like they're more a "part of the action", and less of a coach. Backbreaker was released on June 1, 2010. A demo was released a few weeks prior, on May 21.

Backbreaker also has a highly detailed and complex team creator, which has drawn comparisons to the customization abilities of the Forza Motorsport series. The system allows you to create unique, non-NFL inspired teams, custom uniforms and more. Using this tool, many unofficial NFL rosters have been released for the game, with accurate players, teams, and respective statistics.

The game received moderate mixed reviews, with a current Metacritic rating in the mid 50's (54 for Xbox 360, 58 for Playstation 3). On June 25th, 2010, it was confirmed on the game's official forums that a major patch was in development. It was confirmed to fix many major issues and possibly feature additions requested by the community. The patch, titled the "Greathouse" patch, was released on August 4th, and addressed a wide range of issues, including:

On June 29, 2011, NaturalMotion released a pseudo sequel to Backbreaker on the Xbox Live Marketplace. Backbreaker: Vengeance is a collection of mini-games meant to not only challenge the player, but further showcase the improvements of the Euphoria engine as it relates to sports games. The game was not regarded highly among reviewers and did not sell well as such; ultimately driving NaturalMotion out of development in the console market.

Backbreaker requires 1.1GB of free hard drive space to install to your Xbox 360 hard drive. This is a relatively small amount of space when compared to other Xbox 360 games.

Backbreaker is the first sports game that uses the Euphoria physics engine. This allowed the developers to simulate human movement in real time, offering more realistic animations than canned animations and making all the characters using Euphoria fully interactive. The developers used this to enhance the interactions between players. The use of this engine and it's variability has resulted in many YouTube videos showcasing physics errors, with players taking part in extremely violent collisions or making catches, runs and throws that would otherwise be regarded as superhuman.

Through its use in Backbreaker, the Euphoria engine proved itself to be effective in many aspects of football video games. Although not perfect, many tackles look realistic to what you might see during a football game in real life, as well as passes from the quarterback while being tackled or catches being made while the receiver is contacted by the defender. The majority of other football games would be forced to revert to a pre-rendered animation, not allowing the quarterback to release the pass before falling to the ground, or likewise with the receiver making a catch.

Shortcomings of the Euphoria engine in a sports game were also showcased in Backbreaker. When there is a fumble in a crowded area of the field, NPCs will commonly crowd around the ball, all attempting to pick it up at the same time. This caused the physics engine to knock over many players, who then had contact with other players, creating a domino effect of players tripping or falling to the ground; all while the ball is still loose on the field. There are also difficulties between the regulations of the game of football, and the real-time physics engine. Players can often interfere with receivers to keep them from catching the ball without referees calling penalties. Kickers and Quarterbacks can also be contacted well after they have gotten rid of the ball (a major penalty against the defender who makes contact in all levels of football) without any repercussions.

The game adds a challenge to football games which had not been seen since ESPN NFL 2K5's "First Person Football", forcing the player to control the actions of only one individual player at a time. Holding down the right trigger on a respective console, you'll go into "aggressive mode" where you can run into a group of NPCs and stiff-arm them out of your way. However, while doing so, you'll have to use the A button (X on PS3) to switch hands in order to make sure the proper arm is not holding the ball, and free to block. Other football games such as Madden automatically cause the player-controller character to complete such actions, without any additional user input. Other moves in Backbreaker include jukes, hurdles and spins. Backbreaker also puts a high emphasis on it's tackle system, which has no canned animations, instead using its complex Euphoria physics engine to create real-time collisions between players.

Backbreaker features a "Tackle Alley" mode, where players take on an open-field of defenders as a single running back. The goal of Tackle Alley is to reach the opposite end of the field without being tackled. Players can progress through a total of 100 different rounds, all increasing in difficulty through different arrangements of defenders, and presenting defenders with different abilities. Players can accumulate points through a number of avenues in-game. These include "jukes", shoulder "barges", and even dancing or "showboating" on-field. There are also certain "zones" on the field that are typically more challenging to reach, but reward the player with bonus points. Online leaderboards are kept for point records.

Note that all these teams are fictional and include no real players.

There is currently a Backbreaker mobile game (also known as Backbreaker Tackle Alley) available on the Apple App Store and Android Market. The game features high quality graphics for a mobile game, and focuses on evading obstacles to reach the end zone. There are three difficulties, each featuring their own unique challenges and have a horde-like endurance mode where the player braves multiple waves of field challenges. This version was developed by Ideaworks game studio.

The game is played by tilting the device to move around. At the bottom of each side of the screen, you have your juke and spin buttons, as well as sprint and showboat. There are different areas of the endzone that net you different amounts of points. To get even more points, you're given the option to showboat after passing the last opponent. This can get you loads of points if you manage to hold it all the way to the endzone.

There are three difficulty modes: Rookie, Pro, and Hardcore. Each difficulty includes a challenge and endurance mode. In challenge mode, you must beat a challenge to unlock the next challenge level. The challenges basically ask you to complete a certain number of waves. According to your score, you get a helmet at the end of each challenge: bronze, silver, gold and the best and hardest one to get, the Backbreaker helmet. The game sports a Facebook feature that lets you share your scores with your friends. Endurance pits you against endless waves of enemies.

At the beginning of the game, the player can customize his character. He can give him a name that is shown on the back of his jersey, select a number for him, define his skin tone and give him a team.

The mobile games were so successful for NaturalMotion that in 2011 the company announced they would no longer be developing games for consoles such as the Xbox 360 or Playstation 3; and would solely focus development on games for mobile platforms.

An HD version of the Backbreaker mobile game was released for the iPad on April 2, 2010. 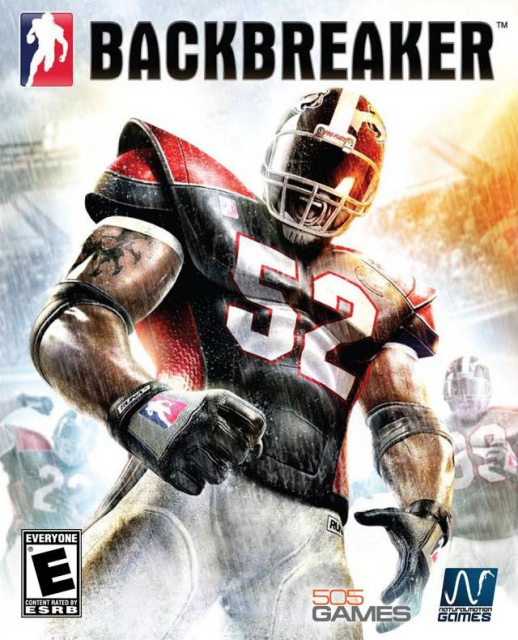