WildSnake (known in Japan as Super Snakey) is a tile-matching puzzle game developed Bullet-Proof Software (along with Manley & Associates) and published by Spectrum HoloByte for the Super Nintendo Entertainment System and Game Boy in North America on September 1994. Both versions were later released in Japan by Yojigen on December 1994.

One of five games from the publisher that's endorsed (or "introduced") by Tetris creator Alexey Pajitnov (the others being BreakThru!, ClockWerx, Qwirks, and Knight Moves), WildSnake is an official adaptation of a 1992 MS-DOS PC game by Russian studio Gamos known as Змеелов (Zmeelov, or "Snake Catcher").

Similar to Puyo Puyo and Dr. Mario, players guide a multi-tile piece (resembling a snake) downwards on the playfield (similar to the 1982 arcade game Nibbler), slithering sideways when it cannot move downwards, until it can no longer move. Snakes pieces come in multiple sizes and color patterns, and if the head touches another snake of the same pattern, both snakes disappear (granting points and letting freed snakes move automatically, potentially granting combos). 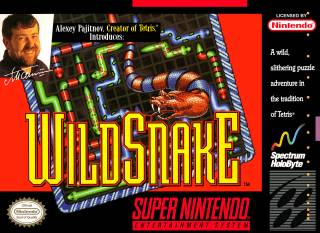