Rogue is a classic ASCII-based RPG, infamous for its difficulty. It is known for spawning its own genre, called Roguelikes, and its influences can still be seen in a wide variety of other games.

Originally developed around 1980 on the UNIX operating system, Rogue became popular on college systems throughout the early 1980s. The original authors of Rogue were Michael Toy, Glenn Wichman and Ken Arnold. Because of the game's success, Michael Toy and Jon Lane ported the title to IBM PC, and later it was ported to Macintosh by Michael Toy. The franchise's marketing was eventually handed over to publisher Epyx, who Amiga, Atari ST and CoCo versions. Further ports were handled by Mastertronic in 1988 for AMSTRAD CPC, Commodore 64 and ZX Spectrum computers.

Rogue is the quintessential fantasy dungeon crawler, sending the player down through many levels on a quest to recover the Amulet of Yendor (Rodney backwards), and return with it to the surface. Since the levels become increasingly more challenging, completing the game is notoriously difficult. The game's original graphics consist solely of ASCII; the player character is represented on screen by the "@" symbol; this was changed to "☺" in a later port. As well as this, different letters and symbols represent different enemies, items, and the environment. Later versions added sprite-based graphics, but ASCII graphics are most commonly associated with Rogue.

Movement is made with the arrow keys, however earlier versions used "HJKL" as the main controls. There are also single key presses for actions such as "quaff" (Q), "eat" (E), and "wield" (W). Each level contains a maximum of nine rooms, with some rooms being replaced with a dead-end corridor.

The key is to balance exploration with progression, too much exploring can waste food and risk loss of health to monsters; too much focus on progression and important items may be missed.

Developed in 1981 as part of a research paper by four university students, Rog-O-Matic is a bot designed to automatically play through Rogue. The bot is capable of consistently beating runs of the game, and would inspire a number of later bots designed for other games and uses. 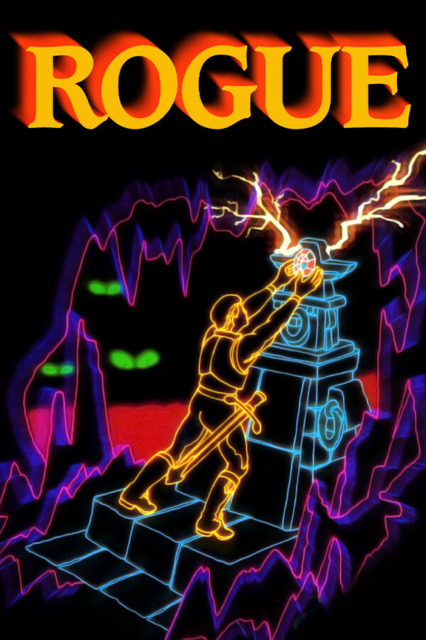