Dragon Quest VII: Fragments of the Forgotten Past

The seventh numbered entry in the Dragon Quest franchise, originally released for the PlayStation and later remade for the Nintendo 3DS.

Dragon Warrior VII is a Japanese turn-based role-playing game for the Sony Playstation game console. It is the seventh game in the Dragon Quest series (The series was referred to as Dragon Warrior in the U.S. until the release of Dragon Quest VIII) , the only game in the main Dragon Quest series to be made for the original Playstation console and the first Dragon Quest game (from the main series) released in the U.S. since Dragon Warrior IV. The game was developed by Heartbeat and Arte Piazza under the supervision of Yuji Hori's Bird Studio for Enix, with music by Koichi Sugiyama and art by Akira Toriyama. The game is known for being over 100 hours long, without partaking in any of it's optional side quests.

The game follows the Hero and his band of friends as they discover secrets about their small port town of Estard and the island in which it rests. By inserting magical shards into an ancient ruin close to their home, they unlock portals to different parts of the world. The catch - these portals send them to a different continent, in a different time, and by solving the particular continent's dilemma, releases the continent from it's temporal prison. This allows for more parts of the world to be explored in the present, the player slowly bringing the world to life, one continent at a time.

While Dragon Warrior VII may not play too differently from it's predecessors, it does include an extensive class system with over 50 available classes.

Dragon Warrior VII (AKA Dragon Quest VII) plays like an evolved version of the original Dragon Warrior for the NES. Mostly because that's exactly what it is. The Dragon Quest series is known for having created the formula that most Japanese role playing games (JRPGs) use today. While most of the adventure is rendered in 3D, combat is still performed in a first person perspective and the world map is 2D with an isometric view that's reminiscent of the role playing games released for the SNES. Combat is turn-based with up to 4 party members.

While the flow of Dragon Warrior VII is similar to that of a traditional Dragon Quest, world exploration is a bit different. In prior Dragon Quest games a player could simply level up in any part of the world and would be free to explore all of it, unless however, a specific mode of transportation was needed. In Dragon Warrior VII, the player must first unlock different parts of the world from Estard Fane by collecting missing shards. Estard Fane functions as a miniature HUB world with pedestals missing different shards, once the correct shards are placed in the correct pedestals, the pedestals can be used to teleport to a land trapped in the past. Once the player defeats the evil or solves the crysis locking the land in it's temporal prison, the continent is freed in the present. This allows players to re-explore certain areas with purpose, but it also allows for the player to see their influence on the world in both direct and indirect ways. What's important to note however, is that the shards required are collected through the player's travels, but for the most part are completely miss-able, requiring the player to open every chest they come across and to fully explore the world.

Since the player is likely to rescue a continent from the past, then explore it in the present, the game has an episodic feel to it.

Dragon Warrior VII employed a class system similar to that of Final Fantasy V and Final Fantasy III, though your characters do not start out with any class at the beginning of the game. In order to be able to change classes you must first reach Dharma Temple. Upon Reaching Dharma Temple you will be able to choose from 10 initial classes (Warrior, Fighter, Thief, Bard, Mage, Mariner, Cleric, Dancer, Shepherd, and Jester). Any time you wish to change your characters class in the game you must first return to Dharma Temple as it is the only place that you can change your characters class.

Fragments of the Forgotten Past

Dragon Quest VII: Fragments of the Forgotten Past is a remake of the seventh Dragon Quest that was developed by ArtePiazza for the Nintendo 3DS and released in Japan on February 7, 2013. Not only does the title feature a fully redone presentation with polygonal characters, instead of the 2D sprites from the original, the game's opening hours were redesigned and streamlined. The remake also has visible enemies on the the world map instead of random encounters and party members appearances change depending on which class they are assigned among other additions. Nintendo published the remake outside of Japan in 2016 directly because of western fans campaigning to have the title localized. 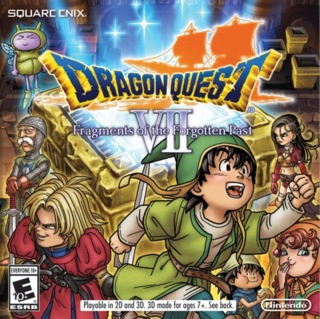