Hexen (sometimes known as HeXen: Beyond Heretic) is a fantasy first-person shooter developed by Raven and published by id on October 30, 1995 for the PC. It is the second game in the Serpent Riders trilogy (between Heretic and Hexen II). The story takes place in the realm of Cronos, which was overtaken by the Serpent Rider Korax. The player controls one of three heroes ( Baratus the Fighter, Parias the Cleric, or Daedolon the Mage) as they set out to destroy Korax.

The game builds upon the same engine used in Heretic (which uses a heavily-modified id Tech 1, the same engine used in Doom). In addition to the modifications found in Heretic, Hexen also includes jumping, multiple classes, rotating/moveable walls, weather effects, a level scripting system, CD audio, FMV cutscenes (for the CD version only), eight player multiplayer, and a system of interconnected levels (called "hubs"). The source code for this engine was released twice: one in 1999 under a restrictive license and one in 2008 under the GNU General Public License.

The game was published for the Mac in 1996 by GT Interactive (who also oversaw distribution of the PC version). In early 1997, the game was ported to the Nintendo 64, PlayStation, and Sega Saturn (all which were published by GT Interactive). The Nintendo 64 version, ported by Software Creations, includes split-screen multi-player ( for up to four players) and text narratives in the loading screens of each level (describing each level). The PlayStation and Sega Saturn versions were ported by Probe, and includes graphical restrictions (less detailed architecture, less monster sprites, etc.) and lower frame rate. The PlayStation version does not support multi-player, while the Sega Saturn version includes two-player link-up multiplayer only accessible via a hidden cheat code.

Hexen was one of the first first-person shooters to let the player choose between one of three unique classes, each with their own unique attributes, weapons, and item effects.

Tougher and more agile than the other classes, the fighter specializes in melee combat. His only weakness is his lack of ranged attacks.

Despite the class name, the cleric does not heal others. A balanced character with a lot of specialized weapons.

Weak and slow, the mage specializes in powerful long-range weapons.

Hexen splits the levels into five key episodes, also known as "hubs." Each episode requires the player to solve a very large puzzle.

The game also supports multiplayer in both co-operative and deathmatch settings for up to eight players. Some weapons, such as the Wraithverge, have been nerfed to keep deathmatch balanced.

Deathkings of the Dark Citadel 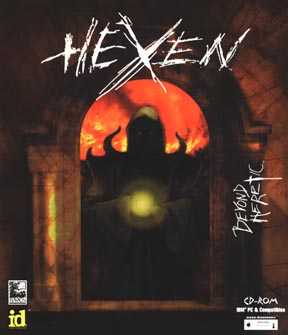