JESUS: Kyoufu no Bio Monster is a Famicom port of Enix's classic 1987 visual novel adventure game, JESUS. The Famicom port was created by Chunsoft and King's Record in 1989. The game is a cult classic amongst many Japanese and American retro gamers thanks to the game's eye catching title. Though the Famicom port had a lower resolution than the NEC PC-88 original, this is the version of the game best known to Western gamers.

JESUS: Kyoufu no Bio Monster was never released outside of Japan but an English translation patch was released by Niahak in 2006. However due to space limitations Niahak's translation had to be greatly simplified and many of the menu commands had to be abbreviated. On June 8, 2012 a new translation patch by Stardust Crusaders and Niahak was released. The new patch increased the size of the game's script and fixed many of the problems with the original translation. The patch also gave the game a new English title screen which translates the game's name as, "JESUS: Tale of the Dreadful Bio-Monster." 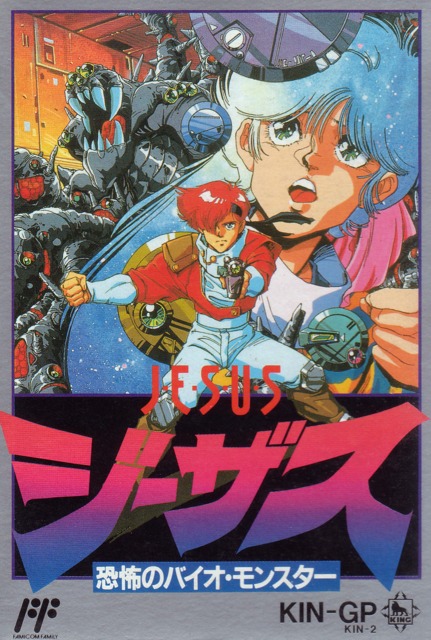