The very first game in the long-running Super Robot Wars series. As the Getter Team, Mazinger Team, or Gundam Team, players fight against the space monster Gilgilgun in this strategy RPG.

Super Robot Wars is a strategy game released in Japan on April 20, 1991. It features Dynamic Productions' Mazinger and Getter Robo franchises alongside Sunrise's Mobile Suit Gundam series. It would be succeeded by Super Robot Wars 2 and eventually spawn a franchise that has seen regular releases for over 20 years.

Deep in outer space, the evil monster known as Gilgilgun is born. Obsessed with destruction, it travels across the galaxy, destroying every planet that it comes by. The monster eventually reaches the Super Robot homeworld, and begins to use mind control to take possesion of the planet's denizens. Fortunately, some are able to elude its grip, and are now faced with the task of rescuing their friends and destroying Gilgilgun.

A list of the anime series which are featured in the game. Most of these series would become mainstays in the SRW franchise.

Super Robot Wars is a strategy RPG; the player's force moves across grid-based battlegrounds to confront the enemy force, with the ultimate goal of capturing the enemy's main Tower. Along the way, the player may attempt to convince enemy robots, converting them into allies. Likewise, should the enemy destroy one of the player's robots, it may appear in a later stage as an enemy. This continues until the final stage, where the player's force faces off against the monster Gilgilgun.

Exclusive to this Game

Towers. There are towers scattered throughout the various battlefields in the game. Once a player unit reaches the Tower, the structure is captured; this yields an item and becomes a space for robots to recover their HP. Capturing a special tower causes the stage to end.

Multiplayer Mode. This is the only single SRW to feature a two-player mode. (Super Robot Wars XO has multiplayer, but it is not SRW's traditional SRPG gameplay)

Spirit Commands. Known as seishin in Japanese, these are support "spells" that improve the robot's status (or occasionally hnder the enemy's). The modern Spirit Command system would not be introduced until Super Robot Wars 2; in this game, only the main character can use Spirit Commands, and the selection is randomized. In this game, SP represents the number of times the main character can look for a seishin to use; even if the player chooses none, SP is still lost.

Items. Equippable items appear in nearly every game of the SRW series. However, this game allows the player to equip weapons onto robots, a feature which would only be used again in the Original Generation line of games. 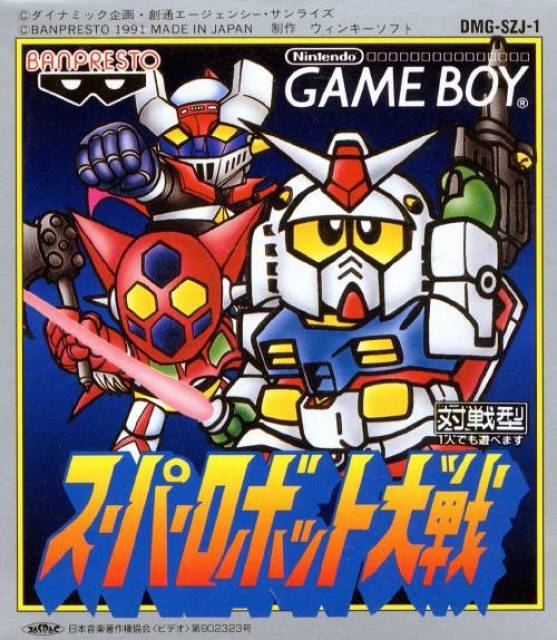