Tengai Makyou: Ziria is an RPG released by Hudson Soft for the PC Engine in 1989.

Tengai Makyou: Ziria is the first entry in the Tengai Makyou RPG series. The game was developed by Red Company and published by Hudson Entertainment in 1989 for the PC-Engine CD. The game was notable for being the first RPG released for the PC-Engine CD and contained fully-voiced animated cutscenes as well as many other graphical and audio features that demonstrated the advantages of the PCE's CD add on. 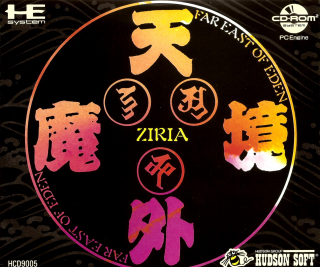