Trash Panic is a PSN-exclusive puzzle game utilizing trash and physics for a unique gaming experience. It is notoriously difficult and contains a vast number of gameplay rules.
PlayStation Network (PS3)

In this Tetris-style puzzle game, players have to arrange and destroy various objects thrown into a giant trash can in an environmentally friendly way.. Heavy objects will crush lighter objects when dropped. Things dropped into the box vary from mundane household items to obscure things like daruma dolls, katanas and artists' figures. Matchsticks may enter the can which sets fire to non metallic items, yet others such as barrels and toilets contain water and put it out. 'Boss' items need to be dealt with in unique ways within a time limit. Certain objects falling into the can are considered valuable and once they reach the bottom can be removed by the Gomy creatures for various bonuses.

Dealing with trash in an environmentally friendly manner increases your eco percentage, being reckless and environmentally damaging increases your eco percentage. This is added up at the end of the stage to decide if you dealt with the stage in an Eco or Ego manner overall which ends up changing the levels and the ending of the game in the main mode. A separate rank purely based on points is given as well.

Levels in the game, known as Stages, start off with the player being responsible of disposing a set volume of trash into a giant trash can. The catch is that the volume of the trash is much larger than that of the can, so the trash needs to be compacted or broken down in a variety of ways for

everything to fit and the stage to be completed. Spilling 3 intact pieces of trash out of the can results in a Game Over and the stage can ever be retried or quit. Items arrive along a conveyer system and drop into the can in much the same manner that Tetris blocks appear at the top of the stage. When many of the items are forcibly dropped into the can onto other using Down on the dpad or the Triangle button, they take damage and break apart, breaking down to take up less space. Items can be dropped on each other; harder, heavier items will destroy weaker, lighter items although even the hard items will break apart after taking enough damage. The force, angle, and pressure is also taken into account so dropping a barrel onto the surface of a computer likely will not break the barrel but dropping it on an edge of the computer will likely break it. Some items are more or less resistant to breaking, soft items are totally resistant and every type of item has its own weak point and most efficient way of being broken down or destroyed. There are also strange black-flippered creatures hanging around called Gomy (from the Japanese 'Gomi' which means trash)

who help you in your task by giving you information on the properties of the current trash item, how far along the stage you are and give the player useful items.

Periodically, valuable 'Mottainai' items will be dropped into the can. 'Mottainai' is Japanese for the sense of regret at wasting the use of an object or resource. These items include pieces of expensive sushi, jewelry, paintings, etc. Breaking these will cause a Mottainai penalty where a large amount of higly durable items fall onto the can. Saving the objects by getting them within reach of Little Gomy, hanging around near at the bottom of the can makes Large Gomy give you a special item relevant to helping you with your current situation.

Special items that either appear as part of the trash cycle or are given by Large Gomy are either extremely durable, explosive, fire based or decomposition based. Fire items like matches and torches heat things up making them easier to break apart and can ignite wooden and broken materials, destroying them if left on fire long enough. Trash that is completely incinerated is removed from the can, making fire an essential tool for making space if wanting to proceed. Fire will also detonate explosives like TNT and propane tanks. Some things like toilets and barrels contain water, which reduces the temperature of the items it falls on. Keeping the oxygen levels up inside the can keeps the fire going, closing the can traps heat and makes everything heat up and ignite quicker, at the expense of rocketing through available oxygen. Explosive items like propane tanks are set off by fire and explode, destroying and ejecting a great deal of trash from the can. Usage of these greatly increases the player's Ego rating and often even blows away things in the background of the stage such as office items or even houses.

Decomposition balls are the Eco answer to setting things on fire. They weaken things by sending out fungus based tendrils which start decomposing adjacent objects. They need to be kept wet in order to work and disappear when dried up or spent. Two or more working at the same time will produce a funnel of fungus between them which decomposes items even faster. Items that are soft or maleable can only be destroyed by burning or decomposition as hard items simply bounce off them or they absorb the impact.

Yet another environmental gameplay mechanic is water and oil which drop to the bottom of the can and do not affect the volume or space. they are both added to the level by certain trash items such as toilets, water barrels, oil drums, oil rigs etc. Oil floats on water and is extremely flammable and can only be removed by being burned. Water cools down trash and puts out fire and is essential to get the decomposition ball working. The decomposition ball sucks in water in order to work.

In every stage, there is a "boss" item. These items are difficult to destroy, being extremely resilient either by being extremely durable or being soft so that the only way to dispose is through burning or decomposition. They need to be

destroyed within a brief time limit, failure to do so will result in a lot of stage themed trash spilling in and around the can. Spilling the Boss item out of the can constitutes an instant game over, no matter how many lives are remaining.

Finally at the end of each stage, a balance board comes up showing your Eco vs Ego rating. Eco is increased by saving Mottainai, decomposing trash (Stage 3 onwards) and being neat (Stage 2 onwards).Ego is increased by having a large carbon footprint (e.g. by burning things), destroying Mottainai, spilling broken junk, and using bombs. Just like in real life, being Eco is a lot harder and is the eventual goal for every stage after several playthroughs, in order to get the best ending. The key to getting a high score for each stage is to commit to either Eco or Ego and doing it fast, getting as many high combo chains as possible.

All items have 5 categories that define them and how best to handle and dispose of them. This data is shown in the bottom right as icons while the item of trash is in play.

The main determining factor for resilience (Weak, medium, strong), weight (how useful it is for destroying other objects by smashing into them and other strengths and weaknesses.

Paper/Cloth - Flammable, can't be destroyed by smashing, has to be burned or decomposed.

Plastic - Resilient but light, usually has a toxic special effect.

Rubber - Has to be handled carefully, if smashed down by force it will bounce back out of the can. There are different levels of bouncyness per item.

Stone - Heavy and resilient, highly resistant to fire and decomposition.

Metal - Heavy and resilient. Immune to fire and decomposition.

Food Ice - Turns into water when destroyed or melted by fire.

Flash Point - Anything that is on fire and sets other things on fire.

Contains Water - If you break or tip this object it'll spill water into the can.

Contains Oil - If you break this object it'll spill oil into the can.

Explosion - Explodes when destroyed by fire, clearing many items from the can at the expense of tidyness and gives a big Ego penalty. The level of explosion is on a per item basis mostly determined by size.

Checkpoint - In Main Dish mode, smashing a checkpoint item changes the difficulty of the stage depending on how you've been doing.

Decomposition Ball - Decomposes other materials when added to water, absorbing that water. Ineffective in oil.

All items are rated from 1 to 3 stars which determines how often they appear in the level.

Stages are completed in sequential order. There are 5 stages in Sweets difficulty, 6 stages in Main Dish and Hell.

Different rules and conditions are imposed to spice up the gameplay. There are 4 missions, with the 4th unlocked only after completing the game in Eco mode.

Local 2 player mode in which trash destroyed in your trash can is added to the other player's can.

Gameplay footage can be recorded and sent to YouTube.

Trash Panic is available to download off the PlayStation Network Store. A demo is now available on the European and the American Store which is 200mb to download. 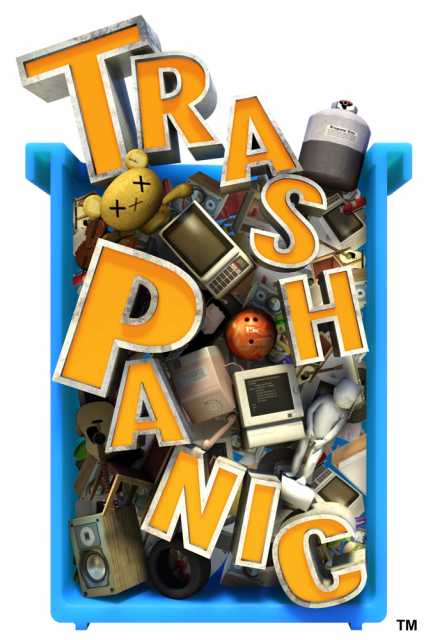