Deathsmiles follows the exploits of the "Daughters of Dior" as they battle an outbreak of violent beasts and monsters in the world of Gilverado. Each of the playable characters has her own unique set of attacks, as well as a personal animal familiar.

The Xbox 360 port has six modes: Arcade Mode, Xbox 360 Mode, Version 1.1, and a special Mega Black Label version of each.

Deathsmiles' stages are broken up into four chapters. The first three chapters have two stages while the fourth has just one. The game also features a couple of bonus stages, Gorge and Ice Palace.

For each of the six main stages, players can choose which difficulty they wish to play on for that specific stage. As such, players are not locked into any one difficulty for the duration of the game. However, both the final and bonus stages have a fixed difficulty. The choice of difficulty adds the potential for greater scoring at the cost of greater amounts of bullet hell to cope with. Bosses are also tougher when selecting a higher difficulty.

There are three difficulty levels normally (1-3) but an extra hard difficulty "999" was added in the Mega Black Label expansion.

In addition to choosing which difficulty players play these stages at, they are also able to choose in what order they are completed. By using both the difficulty and stage selection, players can manipulate their run-through to best maximize their score.

Deathsmiles features cooperative play in both offline and online modes. There are online leaderboards on which players can post their best scores as well as an ability to save and view their replays as well. Players can also download the top 20 scores online. Leaderboards are divided up amongst the many game and character variants.

These are the bosses in Deathsmiles:

The first print of the North American Xbox 360 version was sold in a limited edition package including a Deathsmiles Xbox 360 faceplate and a soundtrack CD with the 15 arranged tracks. The European version was sold as Deathsmiles Deluxe Edition, a package including the original soundtrack and a disc with Windows desktop accessories. The Japanese Limited Edition included the arranged soundtrack and a download card for full voices. 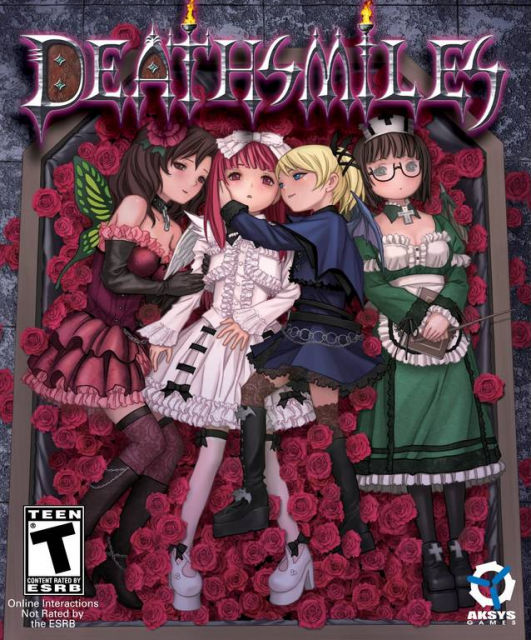