The followup to the 2007 PSP Dungeon Maker: hunting Ground game, Dungeon Maker 2: The Hidden War adds much more content and an all new story for the player to experience.
PlayStation Portable

This sequel adds many new elements to the game, such as new rooms, weapons, spells, armour, pets, shops, and potions. It was developed by Global A Entertainment and Published by UFO Interactive. It was released on December 9th, 2008 in North America, and December 6th, 2007 in Japan.

The game's story revolves around a Dungeon Maker, someone who builds dungeons in an attempt to lure monsters into them so that he can dispatch them before they cause any harm to any humans. The Dungeon Maker arrives in a town that has been plagued by monsters that have been displaced. The reason they have been displaced is because of a demon named Revenger. Revenger is trying to raise an army to break the truce with the gods who had defeated them and almost wiped out the entire population of humans and demons nearly 700,000 years ago. The Dungeon Maker embarks upon the journey to lure Revenger into his trap and defeat him before he can begin a war with the gods.


The Dungeon Maker does lures monsters into his trap by created creative and elaborate dungeons. You start with 1 floor, and a floor is added each time you defeat a boss. The player can add different types of hallways and rooms to his dungeon. Different type of Hallways and Rooms lure different and stronger monsters into the dungeon. You are given tasks by members of the town nearby. They include defeating a certain monster for a bounty, to collecting a certain amount of items from the monsters. As the player defeats monsters, they sometimes drop loot, such as craftable items, weapons and armour. The town features several shops, such as an apothecary, a armory, and a shop where you may buy new Hallways and rooms.

Each floor of your Dungeon acts as a level. You design it to fit certain requirements that will allow you to complete objectives, concluding in a boss monster being lured to a much larger room that you need to defeat in order to get to the next floor. In addition, you will also gain access to different elemental temples, such as fire and water. These temples are used to give the player access to different items and to advance the story. 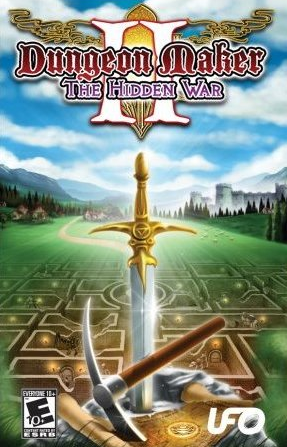