In this sequel to the popular arcade puzzle game, Susumu and Anna dig deep into the ground in order to prevent the world from being overrun by colored blocks.
Game Boy Advance

Mr. Driller 2 introduces Anna Hottenmeyer as a playable character and Puchi as an NPC.

You only need 1 button and the D-Pad on the GBA to play. You dig downwards, and move around to avoiding being crushed by blocks that accidentally fall atop you. You use the button to dig through the blocks. You can move left or right -- you can't jump, but you can climb blocks one block in height simply by moving toward them.

Normally blocks fall into one of four colors and these can simply be dug through. These primary-colored blocks pose little threat, but there are also special blocks that you must deal with. The brown "X" block is harder than normal blocks, and digging through it deducts 20 air from you air gauge. Disappearing blocks will disappear on their own after a moment, resulting in an avalanche of falling blocks, especially if there were multiple disappearing blocks on screen. Blocks of the same color may connect together at any point in time where if there are 4 connected this way they will destroy each other. (Though it is possible to see blocks that started out with 4 or more already connected when you found them. They don't get destroyed simply for existing, but they will get destroyed once they fall, or once an additional block of the same color touches them.) All these rules applies to brown "X" blocks as well. This is the only effective way of destroying brown "X" blocks, and a bulk of the challenge in Mr Driller 2 stems from trying to get rid of them this way.

You also will need to keep an ever so watchful eye on your air tank as it will continuously deplete requiring you to locate air canisters in between rocks. The further you've gone down the faster the game is and thus the quicker the tank will deplete. 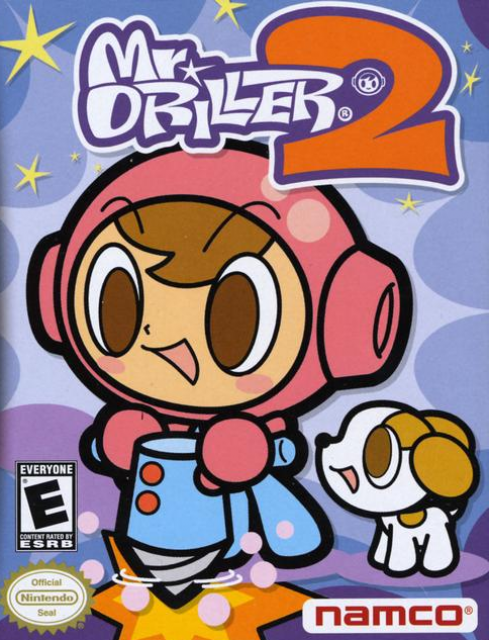