The latest entry in the Tales franchise for the Nintendo Wii. It is the first 3D entry for home consoles to use character designs by Mutsumi Inomata instead of Kousuke Fujishima, who most Western fans associate with the Tales series.

Tales of Graces is the 12th title in Namco Bandai's Tales of series to receive the "mothership" label. It features character designs by Mutsumi Inomata and a new "Style Shift" battle system.

Graces' "Style Shift Linear Motion Battle System" (SS-LMBS) presents 2 styles of combat for the player to use. It also features a new concept dubbed "Around Step" which allows the character to sidestep in a circle around the enemy. This battle system uses the Chain Capacity (CC) gauge introduced in the PS2 remake of Tales of Destiny instead of the Technical Point (TP) gauge, it will be the very first 3D Tales of game to do so. The Free Run system from the previous games also returns, however in Graces it relies on the Chain Capacity a character has available.

Tales of Graces takes place seven years after the protagonist, Asbel Lhant, goes through an ordeal as a child and started training to become a knight. However, instead of becoming a knight, he decides to take over the role of feudal lord of the village of Lhant when his father, Aston, is murdered.

An enhanced PlayStation 3 port, Tales of Graces f, was formally announced by Namco Bandai Games Inc. on August 2nd, 2010, during a 15th Anniversary Tales press conference. It was released in Japan on December 2nd, 2010, and was released in the US on March 13th, 2012 and later in Europe.

Changes and additions in this version include: 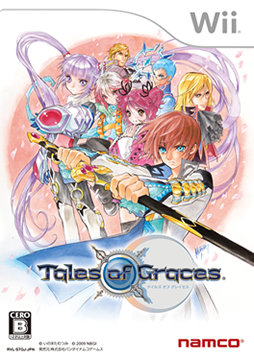