Crush is a 2007 puzzle-platform game developed by Zoë Mode and published by SEGA exclusively for the PSP. It was first released in the United States on May 25h 2007, then in Europe on May 29th 2007 and in May 29th 2007. The game was made available for digital purchase in the PlayStation Store on October 1st 2009 and this digital version of the game is playable on both the PSP and PlayStation Vita consoles.

The game puts the player in the role of Danny, a young man suffering from insomnia caused by post traumatic stress syndrome. His repressed memory and anxiety issues, as well as his fear of hospitals, forces Danny to seek the psychotherapeutic aid of Dr. Reuben, a scientist of questionable sanity. Dr. Reuben fits Danny with a helmet of his own design called C.R.U.S.H. (Cognitive Regression Utilizing pSychiatric Heuristics), which theoretically should allow Danny to repair his damaged mind through induced hypnosis. Danny travels through his subconscious unraveling repressed feelings by making use of a perspective-shifting mechanic to solve the game's challenges.

The reception of Crush by critics was generally very positive, and it won many awards, including several noting it for ingenuity and innovation in design mechanics. A remake titled Crush3D was released for the Nintendo 3DS in March 2012, featuring a different plot and entirely reworked aesthetics.

Crush's gameplay revolves around using the ability of changing dimensions from 2D to 3D, and vice-versa, to solve complex puzzles. In Crush the player controls Danny's movements through a 3D environment which can be switched to a 2D perspective at any time. In this manner the player is able to manipulate the environment so that Danny can reach areas of each level he couldn't ordinarily access. This ability can also serve to obstruct the player, by placing Danny in situations which are impossible to escape from. Additionally, antagonistic creatures populate some levels, and while Danny has no traditional weapons, he is able to crush them using certain types of blocks and boulders.

Danny must traverse many puzzle-laden sections of his traumatized subconscious, collecting a required set amount of marbles before moving on to the next level. There is no game-over screen in Crush, as the game focuses of puzzle solving, meaning there are checkpoints in every stage and the playable character does not have a limited number of lives - however, the number of "deaths" is taken into account and penalized in the grading at the end of every level. Each level features two collectibles, a Puzzle Piece and a Trophy.

These mechanics are the basis of the game. The farther the one advances into the game, the more complicated the puzzles get, as the difficulty level increases from easy to diabolical. Levels become increasingly complex, and elements that change states depending on dimensions are eventually introduced.

For instance, a required marble may be in a hole so deep that Danny cannot jump into it without "dying", since Danny will "die" if he lands a jump from a really high place. In this situation the player has to place the camera looking down from above and then crush the level to 2D. Upon doing this, the level is effectively a top-down platformer and therefore there is no notion of depth - meaning the object is at Danny's reach. The game forces the player to take advantage of this ability in a variety of different ways.

In every level Danny will have to collect a set number of his lost marbles in order to unlock the exit to the next level. Marbles are small glowing spheres, and differently colored marbles hold different values. After collecting the required number of Marbles the exit will open and the player can now exit the stage. At the end of each stage the player will be graded from E to A, A being the highest grade possible. To obtain a higher grade the player must get all marbles, complete the stage in the least time possible, die the least amount of times possible, and get the Puzzle Piece and Trophy of each stage.

Puzzle Pieces are hovering somewhere in each the level. If the player completes the stage having obtained the Puzzle Piece, bonus art will be unlocked. If the player crushes the scenario into 2D while the Trophy "Thought" (a glowing drawing of a trophy within a circle) is onscreen, a trophy will appear. Most times it won't appear right in front of Danny, and the player will have to find a way to reach it. Upon completing a level with a trophy, a Time Trial of the corresponding level is unlocked.

Many in-game elements have different behaviors on each dimension.

All blocks (floor tiles) behave the same on 3D, but some have a specific behavior that activates on 2D mode.

"Thoughts" are represented as glowing drawings plastered on surfaces with effects that only trigger in 2D, while they are onscreen.

Other Things Affected by Crushing:

Crush was a critically acclaimed PSP title. The game holds a metacritic score of 83 out of 100 based on 41 reviews, a reception the review-aggregator labels as "generally favorable". Out of the 41 reviews, 34 are marked as positive while the remaining 7 are labeled "mixed".

Writing for GameSpot, Ryan Davis gave the game a score of 8.5 out of 10, and praised Crush for its originality, plot, and intricate puzzles. He asserted that Crush "is an action puzzle game that owes very little of its novel concept to games that preceded it", and that the game's "story is surprisingly engaging". Ryan noted that the game visually has "a warped, through-the-looking-glass aesthetic" which contributes to an overall "surreal tone".

Even though Crush was met with critical praise upon launch, sales were disappointing. On GameSpot's Best of 2007 Awards it was nominated for the "dubious honor" of "Best Game that No One Played".

Despite not being in the official compatibility list, Crush can be played on the PS Vita. To do this, the user must first download the game to the PS3. From there, go to Content Transfer on the PS Vita and select the game for transfer. Once complete, the game will show up on the Vita's menu. 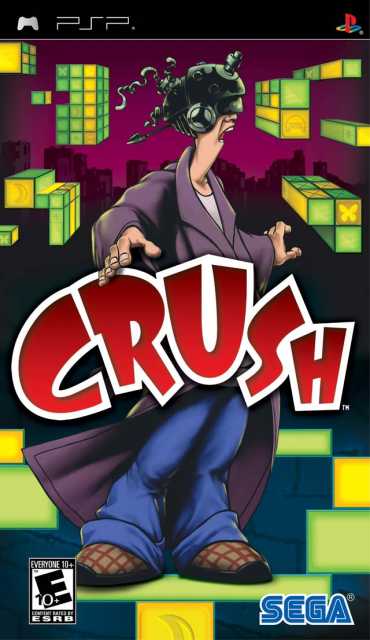