Sonic & Sega All-Stars Racing is a kart racing game featuring several characters from Sega's library of games. Released on February 23, 2010, this is the second game from Sumo Digital Ltd. to feature Sega characters in a sports game, the first being Sega Superstars Tennis. It supports up to four players offline, up to eight online on the console versions, and six on the Nintendo DS version. The PC version is not online-enabled.

In 2011, Sega produced an arcade version of the title, featuring only 13 playable characters and 13 tracks. Game modes include Grand Prix, Single Races and Time Trials. Up to eight cabinets can be linked together for multiplayer modes. Optional kits can be added onto cabinets for ticket redemption for at least 5 tickets for players finishing first in races multiplied by human players who are playing the game. Cabinets run on Sega's Ringwire hardware, which produces a graphical fidelity resembling the lower definitions of the game such as the Wii version and PC version's low graphic definition mode.

On April 30th 2012, Sega announced a sequel for the game called Sonic and All-Stars Racing Transformed, which was released on November 16th later that year.

Playing similar to the Mario Kart series of Nintendo fame, the game has eight different racers driving around a track for 3 to 5 laps. Each track is laid out with various sharp turns, jumps, and shortcuts. When taking on a sharp turn, the player may drift by pressing and holding the Drift button as they turn. While holding the Drift button, the player may also rapidly press the Accelerate button to make their turn even sharper. As the player drifts, they will build up a turbo-boost which will give the player a small burst of speed when they let go of the Drift button. The longer the player drifts, the longer the boost will be, with there being three levels of turbo-boost. If you bump into anything while drifting, you will lose any turbo-boost accumulated from that drift. Pressing the Drift button in mid-air after launching from a jump will have your character perform a trick from their kart. Successfully finishing the trick will result in a turbo-boost upon landing. Much like drifting, you may perform up three tricks to build up to three levels of turbo-boost, with each character having different tricks, some will be able to perform theirs faster than others, with those who have longer tricks are given longer boosts as opposed to those with shorter tricks. If the player lands in the middle of performing a trick, no turbo-boost is given, though they retain the speed they were driving at.

Also strewn about the track are a multitude of item bubbles, turbo pads, and obstacles, all for the racers to use to their advantage. Item bubbles give the racer one of 11 random items to use from. Depending on what place you're in will also alter the odds of which item you will receive. For example, a racer in seventh place is more likely to receive a Giant Rocket or an All-Star, while a racer in first place is more likely to receive a Mine or a K.O. Glove. Driving over a turbo pad will give you a short burst of speed. Driving into an obstacle will cause your racer to spin out and slow down greatly. If you are in the middle of a speed boost, you may drive into certain obstacles with no consequence.

All throughout the races in the console versions, there is a racing commentator that gives running commentary, where he talks about the current track information, counts down to the start of the race, talks about a racer's certain position, announces which lap it is, tells the racers when someone has received and initiated an All-Star Move, and announces the winner. This feature can be turned off in the settings menu. The only version that doesn't have the commentator feature is the DS version.

There are currently 24 characters in all, some being exclusive to certain platforms. Each character has their own unique vehicle and special weapon known as their "All-Star Move." As of April 1, 2010, more characters has been added only available through purchased downloadable content.

All tracks originate from various levels of classic Sega games.

Billy Hatcher and the Giant Egg

*These tracks are exclusive to the PS3 and 360 versions through DLC.

**These tracks are all based on the House of the Dead franchise, but are labeled as "Curien Mansion".

***These tracks are exclusive to the DS and mobile versions of the game.

In addition to the race tracks, there are additional arena tracks made for the split-screen multiplayer mode.

House of the Dead/Curien Mansion

Each track theme features music that is played during gameplay. Unlocking songs from the SEGA Store gives you more track to choose from.

Billy Hatcher and the Giant Egg

House of the Dead/Curien Mansion

*These music tracks are available in gameplay only on the Nintendo DS version.

Along the tracks, you can drive into item bubbles to receive one of various items to aid you in the race. 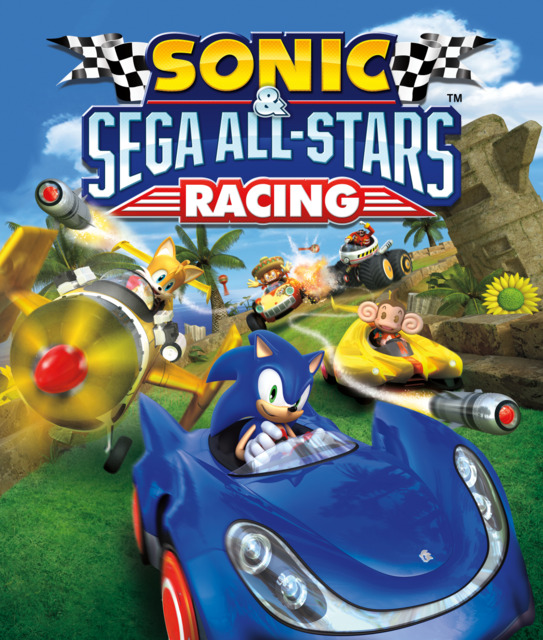