Capcom's answer to Tetris, Super Puzzle Fighter II Turbo is a puzzle game made and released by Capcom. It features the "super deformed" or "chibi" sprites from Pocket Fighter/Super Gem Fighter Mini Mix, and cameos from all over Capcom's fighting universe.,
Game Boy Advance

The basic premise of SPF2T has the player stacking down gems two at a time Tetris style and is always played with two players either Human or Computer. The goal is to explode the different colored gems with the matching Exploding gems by fitting them next to each other. If any of the same colored gems are adjacent to that gem vertically or horizontally, they will explode in a chain reaction. If at anytime four of the same colored gem is matched in a 2X2 fashion, they will conglomerate into one giant gem. The bigger then gem the more points one can score when the matching color of exploding gem is attached. This is a very High Risk, High Reward puzzle game, in that the bigger sets of gems, the less work space you get. The reward is when exploded, the gems will move onto the opponents playing field. When gems hit the opponents side, the gems start off as gem counters with a number on them and a color. Every time the opponent drops a set of blocks on his side the counter will drop by one. This See-Saw style battle goes back and forth until one of the players has no more room to drop gems.

Occasionally the game will drop down a Multicolored Diamond gem. Any color that the bottom point of this diamond touches will explode without having the need to be adjacent to it. As a result, the Diamond gem is best used when in a tight situation or a lead up to a chain combo as when exploded gems disappear, they fall prey to the laws of physics. Any Counter gems that get sent to the playing field via the Diamond gem only start the counter at half the amount rather than the full amount, thus reiterating the High Risk, High Reward strategy.

The Playstation/Sega Saturn/Game Boy Advance versions of the game included "Street Puzzle" mode, where players would take on specific match fights pitting the selected character against a certain enemy of varying difficulty in order to unlock secret characters, alternate costumes, intermission cutscenes, music BGMs ( Including the vocal song "I Want You to Know" by Sakura Kasugano), etc. The HD Remix version of the game has some of these unlocks available from the beginning, yet this mode and a large portion of the goodies are entirely discluded.

There are 8 main characters you can play as. 4 are taken from the Street Fighter series ( Ryu, Ken, Chun Li and Sakura) and 4 are from the Darkstalkers series ( Morrigan, Donovan, Felicia and Hsien-ko) Character selection is more important then just aesthetics in this puzzle game as it determines the pattern of the gems you drop on your opponents side. Your fighter was represented by a super deformed tiny version of your character who stood next to your puzzle board and would do their signature special attacks when you did a fair amount of damage. They were just for show and had no effect on the game.

There were also 3 secret characters: Akuma, Devilot and Dan 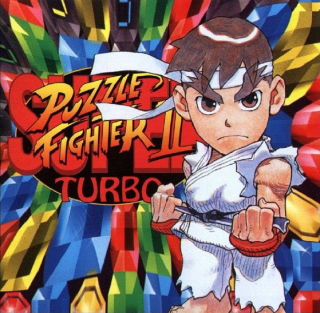