SNK's second foray into the fighting game genre, known for its dedicated linear story, camera zooming effect (allowing for large character sprites in close-range combat), and the introduction of a gauge that depletes when certain moves are used.

Art of Fighting (known in Japan as Ryuuko no Ken, roughly translated to "Fist of the Dragon and Tiger") is a 2D fighting game developed and released by SNK for arcades (running Neo Geo MVS hardware) on September 24, 1992.

Although overshadowed by Street Fighter II, released a year earlier, Art of Fighting innovated the fighting game genre through its use of large character sprites (with battle damage), camera zooming, taunting, super and "desperation" moves, and a "spirit gauge" that depletes when certain moves are used.

The game takes place in the late seventies in the fictional city of South Town, where martial artists Ryo Sakazaki and Robert Garcia must find out the whereabouts of Ryo's kidnapped sister, Yuri. The game is set decades before the events of SNK's other fighting game at the time, Fatal Fury. SNK would regularly find ways to integrate characters from this game into Fatal Fury and vice versa before eventually creating The King of Fighters series, which pits characters from both Fatal Fury and Art of Fighting against each other irrespective of continuity.

The game was released on the Neo Geo AES on December 11, 1992, and ported to the Neo Geo CD (as a launch title) on September 9, 1994. It was also ported to the Super Nintendo Entertainment System by Monolith (released by K. Amusement in Japan on October 1993 and by TAKARA worldwide on December 1993), the Sega Genesis by SNK (released by Sega worldwide on January 1994), and the PC Engine CD-ROM² (requiring the Arcade Card add-on) by Hudson Soft (exclusively in Japan on March 1994).

The game plays like traditional fighting games. The player has two basic attack buttons: punch and kick. The third button is a "utility" button which can allow the player to do stronger punches and kicks (when combined with the punch or kick buttons), throws, and walljumps. The fourth button is a taunting button. Not every character can perform throws and walljumps. This game also features dashing forwards and backwards by pressing the joystick in either direction twice. Fireballs can be canceled out using punches or kicks.

The game also features a "spirit gauge", which controls when the player can perform special and super moves. The gauge lowers after the player performs a special/super move. The more powerful the move, the more the gauge depletes. The gauge also depletes when the opponent performs a taunt. The gauge can only be recharged manually by holding down either the punch or kick button. It will be in one of three colors (green, yellow, or red) depending on the amount left.

Only Ryo and Robert have super (the Haou Shou Ken) and "desperation" (Ryuko Ranbou) moves that can only be learned through a special bonus stage. Both moves take up much of the spirit gauge, but the desperation move can only be performed when the player has 20% life or less (as indicated by a flashing life bar).

In single-player Story mode, the player is usually at a disadvantage with shorter life and spirit gauges. These can be increased in special bonus stages, where the player must perform a certain task (careful button pressing or button mashing).

The game features 10 playable characters, the two protagonists being the only ones playable in single-player Story Mode:

In Story Mode, the game progresses as follows against each opponent consecutively: 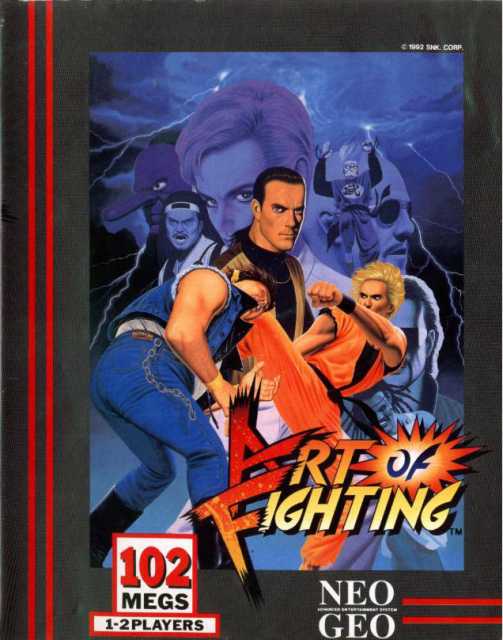