3D Dot Game Heroes is a PS3-exclusive single player RPG developed by Silicon Studio and From Software published by Atlus in North America and South Peak Interactive in Europe . It was released in Japan in November of 2009. A message was posted on Sony's Twitter feed announcing their intention of bringing this title to North America on May 11, 2010.

Takehiko Terada, President and CEO of Silicon Studio, indicated in an interview that the game was originally designed to show off their middleware to partners.

The game features a unique 3D pixel art style, a character editor, and over 100 loading screens that pay homage to classic games.

The game's plot also involves a legendary swordsman who locked away an ancient demon using the power of six magic orbs.

3D Dot Game Heroes plays remarkably like The Legend Of Zelda. The player's character is equipped with a sword and will gradually discover various items over the course of the game, including bombs, a bow and arrow, a boomerang, and various types of magic.

If the player has a full life bar (represented by apples), the sword gains additional characteristics, such as extreme length, width, or the ability to shoot beam projectiles. Multiple swords are available, and players are able to visit a blacksmith to upgrade their swords.

While players will mostly be searching for the main dungeons to find the magic orbs, villagers may provide side quests and other distractions.

From Software has indicated that they "worked hard to make sure the normal difficulty would be adequately challenging for the average gamer." But there are several alternate modes for those looking for more of a challenge.

In Spelunker Mode, players will die with one hit from any enemy. It is intended for gamers who "miss those 8-bit days of gaming when things were difficult beyond all comprehension".

In FROM Mode, enemies are more abundant and difficult. It is intended for gamers "looking for an extreme challenge".

The game also features New Game Plus, which allows players to carry over their gold and weapon upgrades.

The game features at least three mini-games, which offer additional rewards and bonuses to players who master them:

The US release features many more templates (including cameos from the Tenchu series), some of which were released in Japan as DLC. Regardless of their looks, each "character" falls into one of the base classes (Hero, Royal, Scholar).

The character editor can edit an existing template, or players can design their character from scratch. Six "frames" can be designed in a 3D editor, including "Stand", "Walk1", "Walk2", "Hurray", "Attack1", and "Attack2". Saved characters can be exported to a USB stick and shared online.

In September 2010, Altus announced that Sackboy from LittleBigPlanet will be available as a playable character.

3D Dot Game Heroes includes 24 different swords. Players will receive the Sword at the start of the game and the Ancient Sword during the first quest of the game; the remaining swords can be found through completing side quests, exploring the map, trading White Blocks to King Block, or by performing well in mini-games.

Most swords can be upgraded by visiting the blacksmith in the village of Raejack. Each sword is has a base rating as well as a maximum in the following seven attributes:

In addition to the per-attribute maximum ratings, each sword has a Potential value. Potential is the maximum amount of money that players are allowed to spend upgrading it, preventing a player from maxing out all the statistics for any given sword. For example, should a player upgrade the Ancient Sword to the maximum strength, they will not have enough potential left over to add Pierce. (In the event of upgrade regret, swords can be reset back to their base statistics at the blacksmith if necessary.)

On September 23, 2010, Atlus U.S.A. released a patch for the North American version of the game, adding 50 player- and staff-created characters (most notably, a Sackboy character from Media Molecule's LittleBigPlanet franchise), bug fixes while also slightly adapting finish times requirements for the Dash Circuit races and adding the ability to carry over certain swords into a New Game+ playthrough.

Because Atlus U.S.A. does not publish its retail games outside the US, the game's European publisher, Southpeak Interactive, would have had to issue the patch for EU gamers. However, due to unknown reasons, SouthPeak never released the patch for the EU version, causing strong discontent among the fanbase since the changes made to improve the game were rather significant for players attempting playthroughs on harder difficulties or trying to get all Trophies.

A statement on the SouthPeak's official European messageboard for the game simply says:

"Unfortunately there are currently no plans to release the patch at this time. I apologize for any inconvenience that this might cost to you and everyone in the EU. "

To go with the updated-retro atmosphere of 3D Dot Game Heroes, the soundtrack, composed by Shoichiro Sakamoto, also has a similar feel, employing chiptunes with some more modern effects.

15 - Advancing Across the Coastline 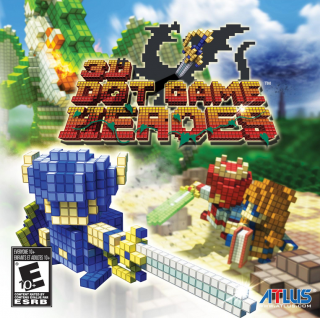