Twinkle Star Sprites is a cutesy versus shoot-'em-up developed by ADK and published by SNK for arcades (running Neo Geo MVS hardware) in November 25, 1996. It is the last Neo Geo game developed by ADK.

Combining elements of a traditional vertical-scrolling shoot-'em-up and versus puzzle games, players attempt to survive waves of enemies while sending attacks to their opponent's playfield. It later received a 3D sequel in 2005 (exclusively in Japan) for the PlayStation 2, titled Twinkle Star Sprites: La Petite Princesse.

The story, as cutesy and nonsensical as it is, puts players in the role of magical child Load Ran who, along with her companion Rabicat, journeys to restore the world from darkness with help of the wish-granting Twinkle Star.

The game received numerous Japan-exclusive ports. It was released for the Neo Geo AES on January 31, 1997 and ported to the Neo Geo CD on February 21, 1997, Sega Saturn on December 18, 1997, and Dreamcast on March 23, 2000. The Dreamcast version includes numerous bugfixes and gameplay options while the Sega Saturn version includes new graphics, voice acting, and an anime-style intro video.

The original version was digitally re-released for the Wii (via Virtual Console exclusively in Japan on August 9, 2011 by D4) and PC (via Steam on May 26, 2016 by DotEmu). It was also included in some Humble NEO GEO Bundles starting in late 2015 for the PC, Mac, and Linux (both downloadable, with ROMs included, and on modern browsers), and was included in both the 2005 sequel (as a hidden unlockable) and the 2008 Japan-exclusive PS2 compilation ADK Damashii.

The gameplay is set to where the object is to reduce the opponents life bar to zero. One match is set to two out of three rounds much like a standard fighting game match.

Each player/character starts out with a 5 heart life bar. Each time contact is made with an NPC Zako, 1 heart of the life bar is lost and half a heart is send to your opponent’s life bar. Shaking the joystick will recover from the stun faster.

After you recover from the stun you go into a weakened state in which you move slower and your shots are weaker and slower.

Getting hit by one of your opponent’s attacks you lose 3 hearts. Seeing as you only have a 5 heart life bar then taking two extra attacks to the face will result in death.

You shot a single shot by pressing the “A” button. Each shot has a different speed based off what character you are using. These are your general all around attacks that you will be using 90% of the time. These can be used for everything. Shooting Zako, your opponent’s attack Zako (kougeki Zako), or your opponent’s flashing Zako. These are also the attacks you’ll want to use to weaken stronger Zako to create combos.

Holding down the “A” button will charge up an attack. Each character has their own variety of charge attack and depending on which level your attack gauge is at affects what happens along with the charge shot. These attacks usually don’t result in combos but can clear a screen when you need to.

The attack gauge is located in the bottom left hand corner of the screen for both players side of the screen. There are 3 different levels of power and with each level comes a new bonus. Each time you destroy a formation of Zako your gauge fills a little. Getting a perfect formation kill will give you a bonus increase in your gauge along with extra points.

Level 1 will just shoot off a standard charge shot with no additional bonus. You can go below level 1 as this would take away your charge attack entirely.

Level 2 will launch and charge attack along with 2-4 of your character specific “extra attack” depending on the character to your opponents screen.

Max level will shoot a charge attack with a Boss Attack.

Fever time is activated by destroying the “orb” in a Zako combo. The orb looks like a blue ball with a crescent moon in it. You can’t start the combo by shooting the orb directly. You have to destroy it in a combo or by using a bomb.

When the orb is destroyed, a voice will yell “FEVER!” and you enter fever time. In this time you get double attack Zako from combos and they fly faster at your opponent. Also during this time no Zako with a bubble will appear around them.

You start out with two bombs, but more can be collected from rotating coins that are dropped off by a flying bunny. Bombs will clear the entire screen of normal Zako and attack Zako but not of extra attacks. Bombs, though, will make you invincible so you easily avoid extras. Bombs are especially useful in getting out of a sticky situation.

NPC Zako are your standard enemies that show up in predetermined formations that are used to create combos. They also act as KO chances for your opponent if you get hit by one. They range from big to small and have different degrees of toughness to kill.

Attack Zako are what result in you getting combos off of NPC Zako and look like flying fireballs with faces. They fly in different patterns varying from straight down to across the screen at an angle. These can be shot by your opponent and sent back at you but this isn’t a good idea.

Extra attacks are what you pick your character for. Each character has a different type of extra attack which are used to try to KO your opponent. These attacks cannot be killed by any shot or bomb and must be dodged to avoid damage. They are created ether by shooting off a level 2 charge shot or by shooting back a flashing attack Zako that your opponent sent to your screen. Getting these extra attacks is the reason why shooting flashing fireballs isn’t a good thing.

Each boss is different and lasts at the most 15 seconds if you don’t shoot at it. Each boss has two special attacks and also can spawn more attack Zako. The more times a boss is spawned in a round the stronger they get. They can be hurt by bombs.

Chains are what send attack Zako over to your opponent’s side of the screen to try to get a KO. Destroying a Zako will cause it to explode resulting in possibly destroying other Zako. This is what creates a combo. The bigger a Zako is that explodes the more Zako it will take with it. This is a basic combo and can be achieved by just shooting the NPCs in a normal mashing shooter fashion.

Zako have different amounts of hit points with purple being the strongest and the weakest being red. Bubbles will also appear on some Zako which requires a single shot to remove the shield and another shot to destroy the Zako.

The bigger a combo the more attack Zako you send to your opponents screen.

Shooting larger Zako until they turn red is the key to creating combos. Larger Zako create larger explosions which will destroy smaller Zako regardless of what color they are. If this explosion destroys all of the Zako in a formation you get a perfect formation bonus. This adds extra gauge to your attack gauge and give extra points.

Note: To play as Dark Ran, hover over Griffon and press down four times and press A or B.

Note: To play as Sprites, hover over Load Ran and press up four times. Press A or B.

Note: To play as Mevious, hover over Griffon and press up four times. Press A or B.

Note: To select Memory, hover over Load Ran and press down four times. Press A or B. 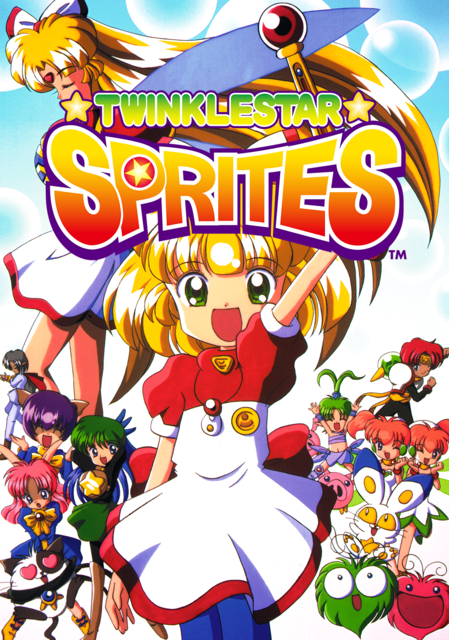