Xardion is an Asmik-developed, side-scrolling action-adventure game. In this title, players take control of three unique robots as they defend their homeworlds from an intergalactic invader.

Xardion, or Choukou Goukami Xardion (lit: "Super Attack God Xardion"), is an action game in which the player assumes three different robots who are defending their homeworld from invaders. Each robot has a different assortment of strengths and abilities that requires that the player switch between them regularly. It's also advisable to switch forms whenever the current robot has incurred a critical amount of damage.

The playable robots include:

Anime giant Gainax is included in Xardion's credits, but the nature of their contribution to the game is unclear. 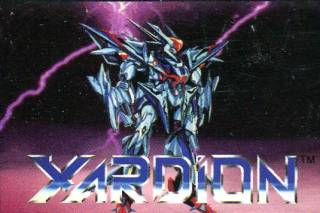