A superhero game developed by Taito. It was initially a first-person, pressure-sensitive, fighting game, for the arcades. It was then released as a brawler for the SNES console.

The arcade version is famous for using a boxing glove, instead of the classic controller. It's the player's job to hit the target as hard as possible and battles are won by depleting the enemy's health bar. A mechanical, pressure-sensitive, punch pad is used to cushion the blow. The player is allowed 3 hits to do as much damage as needed. The arcade game ran on the Taito B System arcade board.

The SNES home version plays far more like a regular brawler game instead, as it does not have the boxing glove accessory.

The game is split over 5 stages: 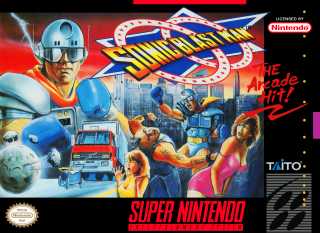