Nonogram/picross puzzle game developed by Sunsoft in 1995. The first in a series of picross games that features Ochan, their cat character.

Ochan no Oekaki Logic ("Ochan's Painting Logic" - Oekaki Logic is a popular alternative term in Japan for nonograms) is a nonogram/picross game for Sega Saturn, Sony PlayStation, Super Famicom and WonderSwan. It features Ochan and the rest of the Sunsoft's Hebereke crew, who present a series of picross puzzles of increasing size and difficulty.

The game features 300 standard puzzles which start at 5x5 and get as large as 30x30, separated into four difficulty tiers. It also features a mode where players can create their own puzzles and save them to the cart, and a mode where two players simultaneously complete a single picture, earning points for each successful "yes" and "no" square to create a competitive element. 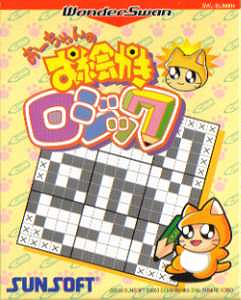