An unusual variation of Mario Bros. in which Mario and Luigi throw "punch balls" at enemies rather than hitting them from below.

Punch Ball Mario Bros. has the look of Nintendo's original Mario Bros., but it replaces the ability to jump from below and flip enemies over with a "punch ball," which can be collected and tossed out a short distance in front of Mario (or Luigi). Enemies hit with the ball will be flipped over, leaving them ready to be kicked off the stage.

The game also puts a pipe at the bottom of the screen. Falling into this pipe will cause the player to lose a life. Enemies fall into the pipe to reset and reappear at the top of the screen again. Original Mario Bros. put two pipes at the sides of the bottom row to allow enemies to reset, but players can't interact with those pipes in any way.

The game was developed by Hudson Soft for release on Japanese home computers, such as the PC-8801, Sharp X1, and FM-7. 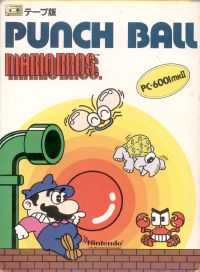