Blackout was the first major release from Danish game developers Deadline Games, in which players assume the role of a schizophrenic person with multiple personalities, who wakes up next to a headless corpse, and have no idea who or where they are, and from there on have to remember.

In Blackout, you wake up with complete amnesia next to a headless corpse, and from there you venture out into the city to try and discover was has happened. The game's tagline is Escape your fate - if you can.

Blackout was unique in several ways: Game designer Michael Valeur has stated that he wanted to incorporate dolls into the computer game medium, and thus all characters in-game are filmed dolls. The game also allows branching of the story and reactions depending on the player's choices.

The game comes on 3 CD-ROMs and a novel.

Upon its release, Blackout was heavily praised by the Danish gaming critics for being "The first real auteur-adventure game" (referring to author and game designer Michael Valeur and his influence on the game). It also won the yearly multimedia award "Årets Thor", and has been included in Danish game canons by both Computerworld and Multimedieforeningen.
Indigo Prophecy Giften The Dream Machine The Dark Eye 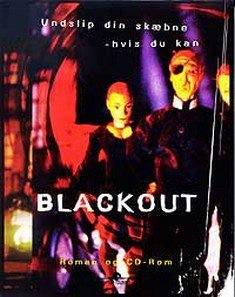