Columns II: The Voyage Through Time

The sequel to the original Columns (released earlier that year), Columns II switches the classic "endless" mode from the original with two new modes:

In addition, the game switches between four "themes" each Flash stage or VS. round, changing the background art, jewel pieces, and music. Keeping with the "The Voyage Through Time" theme, this includes a pre-history theme (with fossils) to a sci-fi futuristic theme (with simple shapes). It is also notable for supporting sit-down "cocktail cabinet" configurations with players at each side of the machine.

It was later included in the 1997 Japan-exclusive Sega Saturn compilation Columns Arcade Collection.

An enhanced version of the game (made by M2) was digitally released for the Nintendo Switch in Japan on August 8, 2019 as part of the Sega Ages series, with an overseas release on October 17, 2019. This version includes new game modes and online multiplayer, as well as an enhanced port of the original Columns. 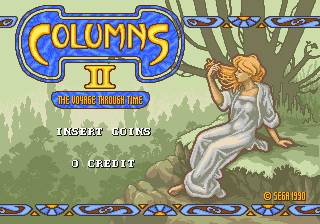