Jackie Chan in Fists of Fire

An enhanced version of the 1995 fighting game Jackie Chan: The Kung-Fu Master, allowing players to fight as Jackie Chan himself while adding new gameplay mechanics to hasten the pace.

Jackie Chan in Fists of Fire: Jackie Chan Densetsu is a 2D fighting game developed and released by Kaneko for arcades in 1995.

An enhanced update to Jackie Chan: The Kung-Fu Master (released earlier that year), Fists of Fire updates the combo system (introducing juggle combos and character-specific strings) while including a special downed state (reminiscent of some 3D fighting games, complete with pursuit attacks and wake-up attacks), a dedicated super meter, and all three boss variations of Jackie Chan playable from the start.

While Fists of Fire is nearly identical to The Kung-Fu Master in most aspects, it includes various differences and additions to its core game mechanics:

All six playable characters from the original game, as well as the three boss variations of Jackie Chan (who are now playable), make a return. All characters (other than Mysterious Lion and Jackie Chan) have new default outfit colors, with some characters now having unusual skin tones (such as Lau having a blue skin tone and Thorsten having green or purple skin tones).

The game now progresses through all characters in a random order, with a random version of Jackie at stages 3, 6, and 9. In Stage 10, players fight a special mirror match boss fight against a more powerful version of themselves (who can perform additional juggling capabilities). Players can play as this version by pressing both the Start Button while selecting their character.

All of the original six playable characters have updated movelists, including new special moves and/or modified special moves. 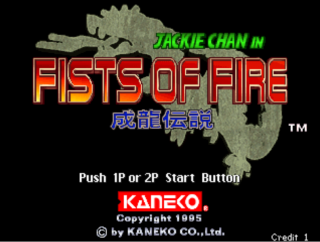