In City Rain you play the part of a environmental team that has been given the task of re-ordering cities. Before they are punished by the "World Environment Protection" agency.

The game plays like a mix of Tetris and the older Sim-City games.  Pieces of a city fall from the sky and you are placed with the task of putting them down on a grid in front of you.  Later in the game you will get premade "Blocks" of buildings that resemble tetris pieces. Each level has a certain amount of times you can destroy buildings by putting a new one on top of it.  However, you can upgrade buildings to new levels by placing a building of the same type on top of it.  Also there are Special Buildings that are unlocked throughout the game campaign mode, these buildings do not come up randomly, your cities earnings must  be used to buy them.

There are 3 different gameplay modes in City Rain:

The game is currently available on PC for 9.95 or Xbox Live Marketplace for 400 MSPoints.
Tetris SimCity 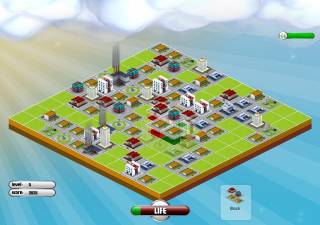