Beat Hazard is a twin-stick shooter by a one-man development team. The beat of the music controls your shots, while the song itself supplies the layout of the level.

Beat Hazard is a game in which content is in some way generated by data outside the game itself. In the case of Beat Hazard this data comes in the form of the player's music. The game comes with a few songs to start with, but can be infinitely expanded upon by the player's own tastes and content.

Beat Hazard was developed by Cold Beam Games and is ranked in the top 20 for the XNA Dream Build Play 2010 Challenge.

Once the track (or initial track in the case of survival mode) is chosen, the user's ship is dropped into the center of the arena as the song begins to play. Throughout the song, the player will have to dodge and shoot both asteroids and enemy ships which appear based primarily on the intensity of the track. The player will earn powerups at random for destroying these impediments. The game includes four different powerups:

While powerups play an important part of the game, the power of the player's weapons is more directly influenced by the intensity of the music. If the music is calm, shots barely have any effect without regard to the number of powerups attained. This will also influence the frequency of appearance of enemies, the frequency of their firing upon the player, and the timing and frequency of boss appearances.

Boss enemies have access to multiple different weapon types and cycle through each one in succession. Rather than firing on the boss overall, you must first take out each of its guns. Each boss has two of each type of weapon on each of its wings. Once all the weapons are destroyed, the wings are the next targets finally ending with the remainder of the ship. At this point, the boss is helpless to fight back. Once the boss is killed, you will receive a number of powerups as reward for the defeat. In some instances, you may even fight two smaller boss ships at once. On harder difficulty settings, the appearance of two bosses simultaneously, in addition to their increased firing frequency, can lead to scenarios much like those common in so-called bullet hell shooters. Shirking typical boss conventions, you may experience multiple instances of bosses over the course of a single song. Fighting a boss in Beat Hazard doesn't necessarily mean you are at the end of a level, but is still a more difficult section to the level. Smaller enemies can continue pouring out during boss fights as well.

At the end of each run (lasting the song in normal play or until you die in Survival), the game tallies up your score and ranks you up. You start at a low level and, as you grow, the game will start you out with new bonuses- multipliers floating around at the start, and the Power and Volume bars being more full at the beginning of a song. The final rank in the game is Elite. Though there are several tiers of Elite for you to get through, there is no real bonus to getting there past bragging rights.

Beat Hazard uses a persistent leveling system where anything a player does adds to their level, and in the Xbox 360 version, this unlocks higher starting bonuses, harder difficulty levels, and eventually the player will start with "Beat Hazard" mode activated from the start.

The PC and Mac versions recently received a patch changing this system over to a perk-based system, requiring that perks be unlocked by leveling up and then purchased and/or upgraded. While a few perks do not have to be manually enabled (such as the Insane and Suicidal difficulty level "perks"), all perks that can be toggled occupy a perk slot, and without upgrading the perk slots available (which is only possible with the Ultra DLC installed), only 3 of these can be active at a time.

Beat Hazard does not include any true online interaction (which is understandable, since you'd be having different songs), but it does have a robust leaderboard system which can foster some asynchronous arcade-style score battles. There are leaderboards for overall score, survival mode score, and multiple boards for single-song score divided by song length. The leaderboards further separate into whatever rank you are at the moment.

The game prominently displays a warning to players upon startup due to the nature of visual effects used in the game. The game extensively uses bright strobing lights and should not be played by anyone who is sensitive to these effects.

Due to licensing costs, Beat Hazard does not include AAC (the iTunes default file format) support out-of-the-box. Support for the AAC format is available as downloadable content - the $1.00 charge is aimed at covering the cost of the license. 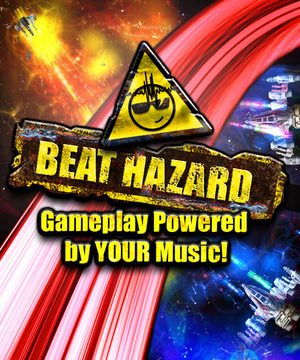