The 3rd entry in the dungeon-crawling RPG series for the DS. Tons of character customization and an old-school level of difficulty await.
Nintendo DS

Etrian Odyssey III is the 3rd game of Atlus' DS dungeon crawling franchise, released April 1, 2010 in Japan, and September 21, 2010 in America. It has the same basic gameplay of the earlier two games in the series, but has a completely new set of character classes and adds a seafaring minigame to the main dungeon crawl. Also new to the series are multiple endings and a new game plus mode.

Deep beneath the southern ocean city of Armoroad, lies an impenetrable ruins known as the Yggdrasil Labyrinth. Rumors suggest this maze was created 100 years ago, when part of the city sank down to the bottom of the ocean after an earthquake. The Senatus has called for adventurers to explore the Labyrinth and uncover its secrets, and the player's party is one of the many that answered the call. The adventurers must descend down to the depths of the ocean to find the mysterious sunken city, and choose the future of Armoroad and its people.

Gameplay in Etrian Odyssey III remains similar to the previous games, with general improvements to game speed and balance. The Yggdrasil Labyrinth in Etrian Odyssey III is shorter than in previous games, with most strata only having 4 floors. However, there are more special features like portcullis that shut after the party passes, and mud tiles that slow the party down.

New to Etrian Odyssey 3 is the sea exploration minigame. Shortly into the game the player will get a boat, which they can use to explore the oceans around Armoroad. There are no random battles while exploring the ocean, and players seek to discover other towns and significant locations while sailing. Doing so will award the player a large cash bounty and access to several quest battles from that location. Reaching these locations takes careful planning, because the ship can only move so many tiles before it run out of rations and have to return to port.

As players explore the ocean, they will find better types of sea rations that will allow them to explore longer. They will also find new pieces of equipment for their ship that will give it different abilities, such as the ability to sail through dangerous reefs, attack pirate ships, and move more per turn. A ship can only have so many pieces of equipment attached to it at a time, and using the equipment in an expedition costs money. Players will also find special Footholds across the ocean, and when activated they will then be able to start an expedition there rather than from Armoroad.

When players reach a new key location, a set of Sea Quests for that location will be available at Armoroad's harbor. These quests are basically just boss battles, but are different in that players will be teaming up with NPCs who will join the party and participate in the battle. Players can also use these missions to play cooperatively with another player who has their own DS and copy of the game. By connecting locally in wireless mode, both players can form a party composed of members from their guilds and team up to fight the boss.

Replacing the Force Boosts of Etrian Odyssey II are Limit Skills, which are set by the player and activated when a character fill their Limit Bar. These skills are found in treasure chests and given as rewards from quests, and can be used by any class and character. Most skills require more than 1 party member to equip it, and requires all equipped characters to be in good shape (alive, and not sleeping, petrified, or confused) to activate. When activated, these skills provide special effects like party-wide buffs or massive damage to enemies. There are 21 Limit Skills in the game.

At the beginning of the game, players create a guild and form a team of up to 5 characters from the 10 starting classes. Players can have up to 30 characters in their guild, and can swap them in and out of their party if they so wished. Character progression remains the same as the previous games, but players can now find special skill books that grants extra points in a particular statistic. The level cap of the game is 70, but can be raised by killing 3 specific optional bosses, each raising the cap by 10, bringing it up to level 99.

About halfway through the game, players unlock the ability to select a subclass for their characters, giving them full access to the skill tree of another class. This allows for an incredible level of customization, and many skills work well with skills of another class, creating powerful combinations for players who plan ahead. A character's skill points and subclass can be reset at the cost of 5 levels of experience, giving some room to experiment with builds.

Players can now improve their weapons through forging in the shop. Players can find special hammers in treasure chests and given as rewards for quests. These hammers are used forge special abilities or effects onto weapons. Each weapon has a set number of slots, and forging requires an empty slot. Some weapons have slots that are used already, and these slots cannot be forged over. Players pay 25% of the weapon's original cost and use some materials (previously sold to the shop) to forge the weapon. Forging will decrease the shop's material stocks and might affect weapon unlocks.

Etrian Odyssey III is the first game in the series to offer a new game plus mode. This mode basically resets the storyline to the beginning of the game, carrying over all characters, unlocks, equipment, gold, and maps drawn. All story quests will be made available again but optional quests are not reset. Labyrinth progression is also reset, meaning that the player will have to rediscover all shortcuts and reopen all access to lower strata again. Sea quests and progression, however, are not reset. The new game plus mode allows players to quickly play through the game again to see all the endings of the game and get all special unlocks from each path.

The classes from the previous games do not return in Etrian Odyssey III, instead replaced with 12 entirely new classes.

2 of the classes are not immediately selectable, and are unlocked with certain choices in the storyline. They are mutually exclusive in a single run, but are available forever after the player unlocks the class:

Shigeo Komori, lead director of the Etrian Odyssey franchise, said that the theme of the game and the inspiration for the sea quests were inspired by the warm southern seas that he was attracted to. 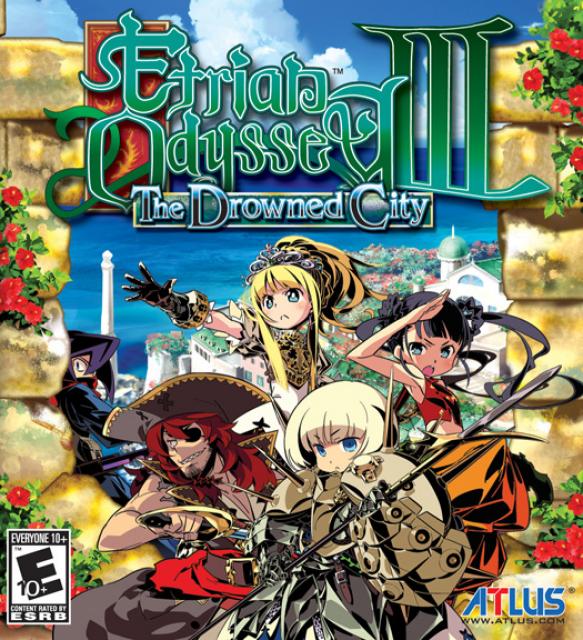