Scott Pilgrim vs. The World: The Game

Beat up a lot of people to win the heart of your girlfriend in this retro-themed 2D side-scrolling beat-em-up based on the Scott Pilgrim series of graphic novels.
Xbox 360 Games Store PlayStation Network (PS3)

Scott Pilgrim vs. The World: The Game is a 2D comedic belt-scrolling beat-em-up developed by both Ubisoft Montreal and Ubisoft Chengdu and published digitally by Ubisoft for the PlayStation 3 (on August 10, 2010) and Xbox 360 (on August 25, 2010). It was later de-listed from both platform's respective marketplaces on December 30, 2014, but was later released for the Xbox One, PlayStation 4, Nintendo Switch, Google Stadia, and PC on January 14, 2021.

It is stylized after retro beat-'em-ups (such as The Simpsons Arcade Game and River City Ransom) and feature heavy use of both chiptune music (from electronic band Anamanaguchi) and pixel art (by Paul Robertson, previously known for the animations Pirate Baby's Cabana Battle Street Fight 2006 and Kings of Power 4Billion%). Similar to Castle Crashers, it features additional RPG elements (including currency and experience systems) and supports four-player local multiplayer (with online multiplayer added as post-release DLC).

Up to four players can take control of either Scott Pilgrim, his girlfriend Ramona Flowers, or fellow bandmates Stephen Stills and Kim Pine as they fight through each stage, punching and kicking their way through waves of enemies while being able to pick up various weapons and call Scott's ex-girlfriend Knives Chau as a "striker". (an ally that either unleashes a helpful attack or heals, depending on the player's character)

Each player has Heart Points and Gut Points. Gut Points can be used to either revive yourself when you're depleted of Heart Points and knocked down or perform either Super Attacks or Striker calls. Holding the Fast Attack button for a few seconds triggers the character's taunt. Multiple players taunting at the same time will perform the Super Coop Attack, which uses up Gut Points to damage every enemy on the screen.

Currency and Levelling Up

Defeated enemies drop coins, which can be used to purchase food and stat boosting items in stores (similar to River City Ransom). Coins can also be found when performing special types of combos (usually involving thrown objects) and hidden inside coin boxes in secret Subspace Highway areas. Shops provide players with a selection of items, with some items that can be carried and automatically used when the player's Heart Points deplete. As the player progresses and defeats more enemies, their character will level up (up to 16 levels) and learn more combos and counterattacks (similar to the NES version of Double Dragon). One attack, Tech Attack #2, can only be bought from a hidden shop.

Knocking out five enemies without getting hit or consuming certain food items puts your character into a temporary Hyper Mode, which increases movement speed and attack speed, as well as letting you unleash a special devastating combo.

Characters have four attributes that can be upgraded by food and stat-boosting items:

There are seven levels in the game. Each level (and certain mid-points) can be accessed via the map. The only map location that is not a level in the game is Joseph's Bedroom, which is used for the unlockable Sound Test menu.

As a throwback to classic games, Scott Pilgrim vs. The World: The Game features hidden cheat codes and unlockables. These codes can allow two players to pick the same character (in an homage to the SNES version of Street Fighter II), activate "blood mode" (in an homage to the Genesis version of Mortal Kombat), unlock extra game modes (Survival Horror, a survival mode with zombies, and Boss Rush, each mode with their own online leaderboards), view the Sound Test menu, and begin the level with the most powerful weapon in the game. Negascott can be unlocked as a playable character by beating the game once with each of the four main characters. After clearing over half the map, Mr. Chau can randomly appear in the map and is fightable. Beating him unlocks him and Mrs. Chau as random strikers alongside Knives.

The first paid DLC pack is the Knives Chau Add-On Pack, released for $1.99 on November 9, 2010 for the PlayStation 3 (coinciding with the DVD release of the Scott Pilgrim vs. The World movie) and on December 28, 2010 for the Xbox 360. The pack adds a new playable character (Scott's ex-girlfriend, Knives Chau) and two new game modes (Dodgeball and Battle Royale).

The second paid DLC pack is the Online Multiplayer + Wallace Pack, released for $4.99 on March 12, 2013 for the PlayStation 3 and on March 13, 2013 for the Xbox 360. The pack adds a new playable character (Scott's "cool gay roomate", Wallace Wells) and online multiplayer support.

The digital soundtrack to the game, composed and performed by Anamanaguchi, was made available on the US iTunes store on August 24, 2010. It was released September 30th, 2010 in other parts of the world.

Scott Pilgrim vs. The World: The Game - Original Videogame Soundtrack 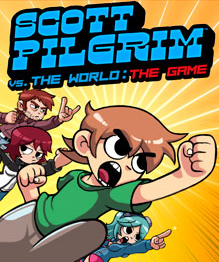