This year's Madden is the 22nd in the annual installment and features the slogan "Simpler, Quicker, Deeper".
PlayStation Portable PlayStation 2 Xbox 360 PlayStation 3

Doritos, a sponsor of Madden NFL 11, allowed the fans to vote for the cover athlete. The choices were:

The voting was open from February 4 to March 15. The cover athlete was announced the day of the 2010 NFL Draft.

Chris Erb, senior director of partnership marking for EA Sports, told ESPN.com "The idea behind the promotion is that throughout the years, no matter who we end up putting on the cover, it's never the right choice. So the idea here is to bring the consumers into the process and have a voice."

The results are in! The athlete for the cover of Madden NFL 11 was released on Thursday April 22nd on the EA Sports website congratulating Drew Brees as the 2011 cover athlete - who was voted for by Madden NFL fans.

Drew Brees responds to being the cover athlete:

"The Madden NFL franchise holds a special place in popular culture and the cover is a coveted position for players all over the league." Drew Brees expressed "I'm honored to be the first cover athlete chosen by Madden NFL fans and it's a great way to cap off an amazing year for the Saints and the city of New Orleans."

The SportsCenter show special On the Clock will be televised live from Radio City Music Hall in New York City (site of the NFL Draft) showcasing the new Madden cover athlete. The show starts at 4:30pm Eastern, live on ESPN, and will last for three-hours.

Madden NFL 11 is integrating a motion engine based on the one used in FIFA 10. This engine is called locomotion and deals with speed, acceleration, and, agility. Player movement will be more responsive and based off of acceleration, momentum, and direction. The Madden NFL development team did a live chat on the new locomotion engine.

The Madden NFL development team said,"The big 3 for locomotion are Speed, Accel, and Agility. Agility is the most important rating for changing of directions, followed closely by Acceleration (need to get back up to speed after slowing down to cut or turn at high speed). If I had to rank them I'd put Speed and Accel roughly even with Agility close behind. Last year Accel and Agility weren't on the same planet as speed. :)

From early gameplay footage the new Locomotion engine appears to have fixed a few flaws present in older Maddens. Lineman no longer teleport to predetermined locations and no longer get stuck into "suction" blocking. Because of the addition of speed, acceleration, and agility rating linemen seem to actually plant their legs and be forced to move around the pocket that way.

Catching has been tuned to fix bugs in previous versions where receivers would run backwards, not recognize the sideline, or make no attempt to stay in bounds on a touchdown catch. The Madden NFL development team did a live chat on the tuning made to catching.

The debut trailer was released at midnight on Thursday, April 22, 2010 on Spike TV after the first round of the 2010 NFL Draft. With the mantra, "Simpler, Quicker, Deeper" the video revealed GameFlow, an all-new play-calling system similar to what an NFL quarterback would experience in a real game. GameFlow is intended to keep players in the action for as long as possible, reducing time spent in the playbook and enabling players to complete games quicker. GameFlow is however a very deep system as players can fully customize sets of plays to use during online or offline games. Players can also rate their favorite plays up to 5 stars(think iTunes) to make creating their favorite sets of plays easier. During the game coaches will instruct the player on what play is being run through their headset. The game will not simply state the name of the play like "X,Y,Z Flex" but instead will instruct the player on what to expect. For example "the TE will cut across the middle of the field after 15 yards, try to read the linebacker to see if he is covered".

The most drastic change is the removal of the Turbo button; a long standing tradition of the Madden franchise. A player will always attempt to run at top speed when the play dictates it. A players ability to outrun defenders or find the hole is entirely based off of their new ratings instead of the holding down of an arbitrary "accelerator". The Turbo button can be turned back on in the options.

Dual Stick Control switches over controls for all juke moves to the right analog stick instead of face buttons; all juke moves are analog and based off of the amount of pressure applied to the right stick. A spin is no longer the same for every player, you can spin less or more based on the movement of the right stick. It is possible for poorly rated players to be unable to achieve certain juke moves resulting in them falling flat on their face.

Other new features include:

For the first time, EA Tiburon let fans vote for the two teams that would be matched up in the demo for Madden NFL 11. The options included:

On April 22, 2010, EA Sports announced that the demo for Madden NFL 11 will feature the New York Jets versus the Indianapolis Colts when the demo arrives in late July.

For the first time, EA Tiburon allowed fans to have an impact in the ratings for rookie players. During the live broadcast of the 2010 NFL Draft, "Ratings Czar" Donny Moore released his preliminary ratings for the players drafted in the first three rounds on the Madden NFL 11 Draft Experience website and allowed fans to personally adjust them.

Prior to the 2010 NFL Draft, EA Sports revealed the attributes that contribute significantly to a quarterback's overall rating, as well as the overall ratings for the top ten quarterbacks currently playing in the NFL.

The Madden development team is on Twitter to give fans the latest updates on Madden.

The Madden 11 soundtrack features a variety of songs that are both covers and original recordings. All songs with * next to them is a cover.

Queen - We Will Rock You*

Kiss - Rock and Roll All Night

Washington Redskins - Hail to the Redskins

We have to make Madden more accessible. You'll see us on Facebook going forward.

The iPhone and iPad edition were released the same day as the console versions, and include the same new feature "Gameflow." However there are game play specific features made only for the iOS4 versions. 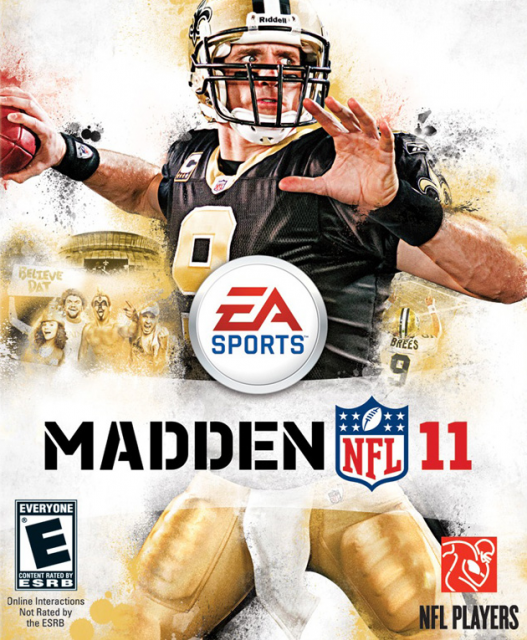