RISK: Factions is a downloadable adaptation of the board game Risk developed by Stainless Games and published by Electronic Arts for the Xbox 360 (via Xbox Live Arcade for 800 msp) on June 23, 2010, PlayStation 3 (via PlayStation Network for $9.99) on December 21, 2010, and PC (via Steam for $9.99) on March 9, 2011. Along with the original ruleset and traditional world map, the game includes a special "Factions" mode that builds upon the ruleset from the 2008 version of the board game with new gameplay elements (such as special territories), new maps, and unique cartoonish factions (including humans, cats, robots, zombies, and yeti). Both Classic and Factions modes can be played offline (against other players and A.I.) and online.

The game also includes a five level single-player campaign, each introducing a new faction (through an animated cutscene) and unlocking new maps for custom games. The cartoonish art and animation for the factions and cutscenes were created by Powerhouse Animations (previously known for the first two episodes of Penny Arcade Adventures: On the Rainslick Precipice of Darkness).

The Xbox Live Arcade version of RISK: Factions also includes two avatar awards that are unlocked by completing the campaign: a gray t-shirt with the game's logo and Generalissimo Meow on it, and a wearable robot head.

While traditional RISK rules are playable on RISK: Factions, a new rules set has been created to make the game more friendly to the console market. With the help of Hasbro's streamlined 2008 RISK rules, RISK: Factions objective-based rules make for a much quicker game. The objective-based rules revolve around victory conditions that require the completion of three objectives while holding onto a "capital city", chosen by each player at the start of the game. In a two player game there is a total of five objectives, while that number will increase as the amount of players increases. These objectives are shared across all players in the game, so competition is high to complete an objective first. By completing an objective, a player is rewarded with a certain bonus. These vary from building an airport on a chosen territory, to the ability of using an extra attack die during combat.

In the classic tradition of RISK, players will duel head-to-head by rolling dice to determine the victor. The player with the highest dice role on each successive die will win, while ties favor the defending player. In addition to classic dice rules, players will be able to trigger "overkill" moments if they correctly roll the dice: a roll of a double six will destroy all enemy forces. Although a "fast battle" option is available during combat, players can witness comical attack animations to lend a bit of entertainment to the sometimes boring task of dice rolling.

With the addition of multiple maps in RISK: Factions comes a dynamic element to those maps. Volcanoes and dams can be used to drastically alter the game map. For instance, if the player takes over a dam they have the ability to trigger a flood that will wipe out nearby territories and everything contained in them.

Probably the biggest advantage a player can have in the game is to control the Temple. The player must control all 3 bordering territories, and once held for a turn, the player can then choose an opposing territory to convert to their side. While it is hard to capture in a game against humans, the Temple can be used to turn a game completely around. Another big map feature is the missile which can be controlled by capturing 3 barracks that are spread across the map. Capturing the missile gives an extra die to the controlling player in surrounding territories. Shrines are the last remaining map element. When the player controls 3 shrines (out of 4), they gain the ability to "freeze" any territory on the map for the next turn, thereby making troops move around it and prohibiting the use of any troops that were on said space.

Five uniquely different factions battle it out in Factions Mode, with each faction representing a particular color in the game board. Each faction contains their own unique artwork (including sets of dice and infantry attack animations) and have no difference in functionality. Classic Mode removes all factions (including animations), leaving players to choose between generic Green, Yellow, Red, Grey, and Blue armies. 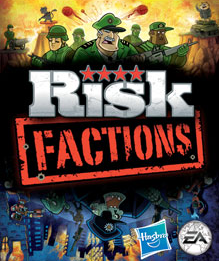