Civilization V is the latest game in the Civilization franchise, developed by Firaxis Games and published by 2K Games. It was released on September 21, 2010 on the PC, and November 23, 2010 on the Mac. It makes a significant departure from the previous games in the franchise, adopting a hexagonal grid (instead of a square grid), and limiting units to one per tile. Some gameplay elements from Civilization IV, like religion and espionage, have been removed, while new elements like city states and limited strategic resources were added.

Gods & Kings, an expansion pack, was released on June 19, 2012 in America, and June 22, 2012 worldwide. It adds 9 new civilizations, 3 new scenarios, as well as religion and espionage in the game. The second expansion, Brave New World, was released on July 9, 2013 in America, and July 12 worldwide. It revamps the Cultural and Diplomatic victories, and adds new trade route mechanics. This wikipage is reflective of the mechanics as employed in the base game.

In Civilization V, the player chooses a civilization and manages its cities and units, trying to achieve victory. The game usually begins in the Stone Age, although players can choose a pre-determined age to start off from, and will progress through the ages to the Future Era. Throughout the game, the player will encounter other civilizations, and can form relations and become strong allies, or crush them to smithereens. Players can win through having the highest score, capturing all enemy capitals, being the first to reach Alpha Centauri, winning the United Nations vote, or even being the most culturally affluent of all the civilizations and building the Utopia Project.

The combat system has been completely overhauled in Civilization V. Unit stacking from previous games has been removed, replaced with a one military unit-per-tile system. Ranged units also make a return to the franchise. They can attack units from a distance, allowing them to take potshots at invading armies. However, they are weak in melee combat and require good positioning or a melee defender to avoid from being destroyed.

Sieges in Civilization V are different from the previous games, as cities are now able to defend themselves. All cities possess hit points--if this reaches zero, the city will fall under the attacker's control. Garrisoning units and building defensive buildings will increase a city's defense rating. Cities can also fire at sieging units, softening them up for a counterattack. After a city has been conquered, it can be: razed, annexed, or transformed into a puppet state.

Naval movement and combat has also been changed, as any land unit can "embark", entering a water tile and automatically turning into a transport ship. Embarked units are defenseless, and will require protection from enemy vessels. All ships are ranged units in Civilization V, although Gods & Kings adds melee naval units that can take cities. Ships can also blockade trade routes and bombard cities and units on land.

Building a city is one of the pillars of Civilization gameplay, and cities can be settled by settler units in any suitable place on the world map. City boundaries can grow, one tile at a time, to a maximum of 3 tiles outwards, favoring food oriented tiles like grasslands over production based tiles like forests. The player can also buy specific tiles, speeding up the rate at which a city expands. Cities generate production, money, culture, and science for their civilization, and players can choose which building they wish to build and what units they wish to train.

City-states are one city civilizations controlled by AI, unable to expand, and cannot win the game. There are 3 types of city-states - Cultured, Maritime and Militaristic - each providing culture points, food, and military units respectively. Civilizations will have to vie for influence over the city-states, performing quests for them or giving them monetary gifts. Being friendly with a city state provides bonuses based on the type, and allying with one will provide a greater amount of bonus. Gods & Kings adds 2 more types of city-states: Religious and Mercantile.

Social Policies replaces Civics from Civilization IV, and are civilization-wide bonuses that are unlocked with enough culture points. There are 10 Social Policy trees - each with 5 policies, opener, and finisher abilities - and are unlocked in various eras. Some policy branches are mutually exclusive. Players can still switch to a conflicting branch, but only at the expense of all the policies of the previous one, and a period of anarchy. If 5 trees are fully completed, the Utopia project is unlocked, allowing for Cultural Victory to be achieved. The 10 social policies are, as follows: Liberty, Tradition, Honor, Piety, Patronage, Commerce, Rationalism, Freedom, Autocracy and Order.

Science is an important part of Civilization V, as it controls how fast technology is unlocked. Science is generated at 1 per population unit, and can be increased through scientific buildings, science specialists, or Social Policies. Trading technologies between civilizations has also been removed. Instead, two civilizations can enter a research agreement (for a nominal sum) where they work together to provide a huge boost to their research. But if they go to war, the agreement is cancelled.

A civilization's economy is reflected by the amount of gold they generate. Gold can be used in a vast array of things, from the maintenance of units, buildings, and roads, to buying and upgrading units. Gold can also be used in diplomacy to improve relations with other civilizations or city states, or used as a bartering tool. Gold is generated from tiles such as coastlines or rivers, and the trading post improvement can be built to generate further income. Luxury resources, trade routes, pillaging tiles, capturing cities, and disbanding extra units will also provide gold.

Happiness is generated through the presence of luxury resources, the construction of entertainment buildings, and the discovery of Natural Wonders throughout the world. Several Social Policies and Wonders also help to alleviate unhappiness. Positive happiness will eventually build up into a Golden Age for a civilization, granting them additional gold and production (and culture in Gods & Kings) for 10 turns.

Great People are special units generated by Great People points. These units can build a special Great Person tile improvement, activate a special action unique to that type of Great People, or can be used to generate a short Golden Age. Great People points are generated from their corresponding specialists and from certain Wonders, except Great Generals, who gain points from land combat.

Bonus resources like cows or fish can help a civilization grow bigger. These types of resources provide additional food or production to tile, and can be improved by tile improvements. A city working a tile with the bonus resource will get the full benefit of that resource, and many bonus resources can be further improved with specific buildings.

There are 28 World Wonders and 8 National Wonders in Civilization V, and the Wonders of the Ancient World DLC adds 3 additional World Wonders to the game.

There are 25 civilizations currently in Civilization V, shipping with 18 and the rest as DLCs. Unlike the previous games, each civilization now gets a special ability that is unique to them. they also either get two unique units, or a unique unit and a unique building or tile improvement. These special abilities give them specific advantages that somewhat reflects the civilization's history. Each civilization is either controlled by a player or AI, and goes through the various eras until achieving victory or is defeated.

When a civilization is encountered, their leader will speak in their traditional language. Bismarck will speak in German, while Elizabeth will speak in English. This gives each of the leaders their own distinctive personalities, though subtitles are also provided to help clarify what is being said to the player.

Civilization V is the first game in the franchise to introduce DLC. Currently, there are 6 civilizations available as purchasable DLCs, and all of them (except Babylon) come with their own relevant scenarios, and have their own Steam achievements. Mongolia was added after the game's release as a free DLC and all players get the civilization for free.

4 Cradle of Civilization map packs were initially only available separately as pre-order bonuses from different online and brick and mortar retailers. Each pack includes a single fixed size map inspired by real-world Asia, the Americas, the Mediterranean and Mesopotamia. The maps were later made available as paid DLC.

The Explorer's Map Pack was released alongside the Denmark DLC. It includes 5 real world location: the British Isles, main island of Japan, the Caribbean, the Bering Strait and Eastern North America. It also added 3 new map generation scripts (Amazon, Donut, Sandstorm) as well as enhanced versions of the Continents and Pangaea scripts.

The Wonders of the Ancient World scenario pack was released alongside the Korea DLC, and can be bought together as a combo pack. It adds 3 new World Wonders to the base game: the Temple of Artemis, the Statue of Zeus, and the Mausoleum of Halicarnassus. It also comes with a Ancient World scenario where players race with other civilizations to built the most World Wonders to win the game.

Inspired by the "Brave New World" scenario "Scramble for Africa" a "Scrambled Contintents" map pack was released alongside the fall 2013 balance patch. It includes map scripts with real world continent outlines but random interiors. A thawed Antarctica and a whole world map are included, as well as some improvements on other map scripts like "Small Continents".

There were no in-game bonuses in the Special retail edition.

The Digital Deluxe edition also came with the soundtrack and the behind the scenes footage, but lacked the figurines and the art book. Instead, the Babylonian civilization and a Cradle of Civilization map pack came with the edition.

The GOTY edition was released September 27, 2011, and comes with all 4 Cradle of Civilization map packs, the Explorer's Map Pack, the official soundtrack, and 4 DLC civilization packs: Babylon, Spain and Inca, Polynesia, and Denmark.

On February 16, 2012, the first full-on expansion to Civilization V was announced. In contrast to the "Civilization and Scenario" DLC packs, Gods & Kings also included major gameplay changes. Amongst them are two heavily fan-requested features: Religion and Espionage. Furthermore, the combat system was reworked, putting a bigger emphasis on a balanced army composition and introducing naval melee units. Other additions and changes include 27 new units, 13 new buildings, 9 new wonders, and 9 new playable civilizations, as well as 3 new scenarios including a steampunk-inspired one.

The expansion pack was released June 19, 2012 in North America, and June 22, 2012 worldwide. It costs US$19.99 on Steam, and a demo (which requires Civilization V to be installed) is available. Gods & Kings is not included in the Game of the Year Edition copy of the game, and must be purchased separately.

The second full-on expansion for Civilization V focusses on tweaking the culture game and diplomacy. To this end several new mechanics were introduced, like archaeology and player-managed international trade routes. The culture has been complemented with tourism - tourism being the offensive part of culture, while conventional culture-points defend against tourism of other Civs. The social policies have been greatly expanded and gained multi-tiered Ideologies, which play a greater role in international diplomacy. The World Congress makes a return from previous Civ games, allowing Civs to vote on various resolutions, like the ban of nuclear weapons or a world ideology.

2K Games announced that the game will use Steamworks. It will be used to provide Steam achievements, auto updating, DLC, multiplayer matchmaking and Steam Cloud support. This means that Steam will be installed regardless of how the game is obtained, despite the fact that it is purchasable through other digital distribution services (such as Direct2Drive). Steam will also be the DRM solution, requiring a one time activation. 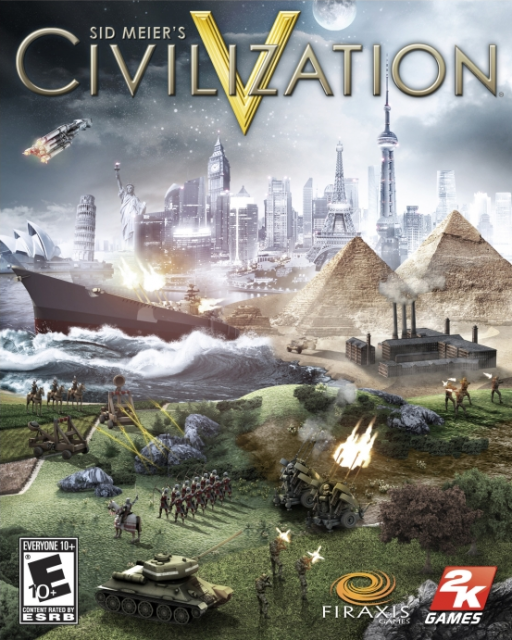