Arcade-action 3-on-3 street basketball from Data East for the Neo Geo. Also known as both Dunk Dream and Street Hoop in other territories.

Street Slam (known in Japan as Dunk Dream and in Europe as Street Hoop) is a 2D 3-on-3 street basketball game developed and released by Data East for arcades (running Neo Geo MVS hardware) in 1994.

Similar to other arcade basketball games of the 1990's (such as NBA Jam), Street Slam eschews rules and the simulation aspects for fast-paced arcade action. It includes some techniques such as faking shots/dunks, alley-oops and rebound dunks, pass interceptions and shot blocks, and a Super Shot meter that fills up over time (giving powerful dunks or guaranteed 3-point shots).

The game received home releases (outside of North America) on the Neo Geo AES in 1994 and Neo Geo CD in 1995. It also received an arcade-only sequel in 1995 exclusively in both Japan (as Dunk Dream '95) and Europe (as Data East's Hoops). Running on Data East's proprietary MLC System hardware, the sequel adds new camera zooming effects, four-player support, and new techniques (such as juking, fading, and using "Super Shot" defensively).

The original game was later digitally re-released worldwide for the Wii (via Virtual Console) by D4 on November 1, 2010 and for the Zeebo (ported by Onan and published by G-mode) in 2010. It was also released digitally as part of the ACA NeoGeo series (on November 9, 2017 for the Xbox One, PlayStation 4, and Nintendo Switch, using the Street Hoop naming for the North American release). The Wii version was also included in the 2010 retail compilation Data East Arcade Classics. 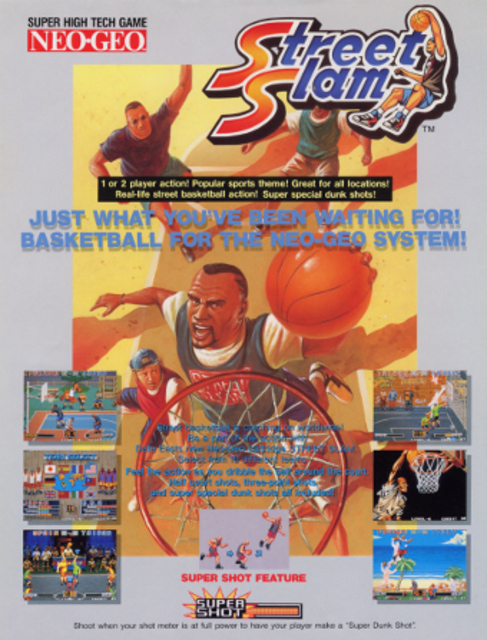