Tokyo Wars is a 3D third-person tank combat game developed and released by Namco for arcades (using Namco System 22 hardware) in Japan on September 1996, with an overseas released on October 1996.

The game puts players in a four-on-four match as one of two teams of tanks (Green Force or White Force) at one of two battlefields based on the city of Tokyo ("Bay Area" and "Downtown"). Each team, consisting of human and/or AI players, has a limited amount of spare tanks, and teams must end the game with a higher amount of remaining tanks to win the match.

Tokyo Wars presents a simplistic (and unrealistic) fast-paced arcade-style take on tank combat, with fast and fluid movement, a health gauge (which can be restored through "Shield" power-ups dropped by eliminated tanks), fast-loading infinite-ammo cannons, and destructible objects. Its dedicated controls utilize a custom steering wheel controller for aiming the turret (with two buttons mounted on the front for firing the turret) and two pedals for tank movement (one for forward and one for reverse). The game automatically adjusts the tank's position while moving based on the turret's direction.

The game was sold in two styles of cockpit cabinets: standard 29" display cabinets and deluxe 52" display cabinets. The deluxe version is notable for including haptic feedback on the entire cockpit for simulating the recoil from firing the turret. Both versions were sold in sets of two machines, which can be linked up with another set for linked multiplayer up to four players (allowing for multiple team combinations, including co-operative matches against AI). 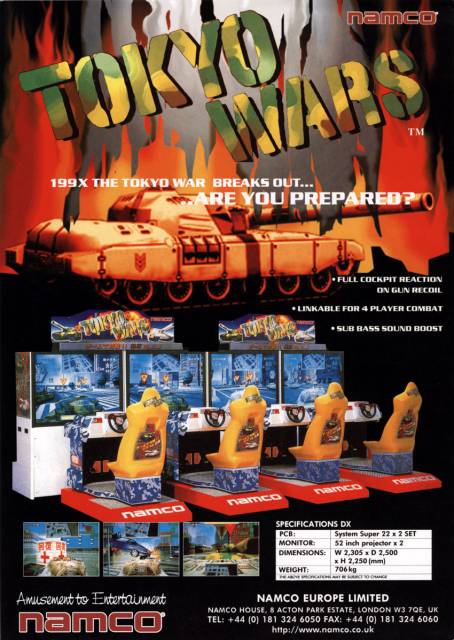