A popular free open source roguelike with tile based graphics.

The name "Stone Soup" is a reference to the old folk story in which a stranger from out of town tricks the residents into cooking a pot of soup for him, by placing his supposedly magical stone in a pot of boiling water, attracting the attention of the townsfolk. The curious residents are now fooled one by one, into giving the stranger an ingredient for his "stone soup", which is the most remarkably tasty soup, but it just needs a little extra garnish each time a resident asks him what he is up. As a result, the entire village ends up cooperating on the "stone soup project", much like the open source community has with Dungeon Crawl.

The game is free to download and can be played in the traditional ASCII format (non-graphical console) or in SDL format (graphical tiles).

The basic gameplay in Crawl is turn-based. Taking an action such as moving, equipping/unequipping an item, attacking, etc. each moves the game forward one turn. After the player takes his turn, all the monsters on the respective dungeon floor take theirs. As turns progress your character, depending on race, becomes more hungry, since death from starvation is an unfortunate reality in Crawl, you will always be on the look out for food. Since the game allows you to butcher enemies corpses for meat, your primary food source will be dead enemies. The game features a traditional experience and leveling system. However, skill progression follows a system similar to Bethesda's Elder Scrolls series, in where skills only improve when used. How quickly they improve depends on the character's aptitude with the skill, which is in turn determined by the character's race. As a result, classes are not very important in Crawl, since they only determine your starting values in a skill, as well as which items you start out with. If a fighter finds a book of magic, he is completely capable of learning spells from it, provided he has gained the spell casting skill some other way. Since skills increase through gaining skill points, of which you get a set amount of each level, the game allows you to disable skills from progressing, meaning that you can deny your character from further developing in an unwanted direction. This is to ensure that your character develops as you wish, as fast as possible.

During play, the player will find a large arrangement of magic items. These range from potions to magical amulets. In true roguelike style, none of these items are identified from the get go. Identifying magical scrolls and potions is very simple, since you just have to use them. Afterwards you'll be able to identify any similar potion/scroll. However, playing guinea pig with yourself can be dangerous, since the game features a vast amount of malicious scrolls and potions. This however, makes it all the more important to quickly identify these items, so that they won't cause you trouble later. Weapons and armor can be enchanted. To identify these items, you can either use them for a prolonged amount of time, and eventually your character will figure out what they do, provided they aren't cursed, in which case you'll instantly know as you're unable to remove the item from your character until you use a remove curse scroll. Items can also be identified through the use of an identify scroll.

While exploring the dungeon, you'll soon amass a small treasury of gold coins, provided you don't suffer an exquisitely painful death at your own hands from unknowingly drinking poison first. Money can be spent in shops, which will typically be found on the lower levels of the dungeon. The shops inventories are randomly generated, but you can potentially purchase anything in shops.

The game features an almost uncountable amount of character options. When creating your character, you pick one of the 23 races/species, ranging from humans to nagas. You then choose one of the 30 backgrounds/classes. If the class allows you to, you also pick a starting weapon and a religion. After you have created your character you start from level 1 of the dungeon (or abyss if you worship Lugonu). The objective of the game is to get the Orb of Zot and escape alive from the dungeon. The orb is locked in a vault in the Realm of Zot, but to get there you must explore the dungeon for three Runes of Zot, as well as a locked portal to the realm. While three portals are always found on the 27th level of the dungeon, the runes are located inside several "dungeon branches". The branches are effectively themed miniature dungeons and typically feature unique tile sets. For example "The Swamp" features large bodies of shallow water, as well as many poisonous monsters. "The Shoals" on the other hand is an almost exclusively deep water based area, heavily featuring merfolk enemies. It is worth noting that water is a very hazardous environmental element in Crawl, unless the player of course has the ability to levitate above the water, or is a merfolk himself.

Because of the games extremely punishing difficulty, and because death is permanent, it is a rare event to complete the game. To prevent people from simply reloading their game when they die, Crawl doesn't allow for any save system besides its own automated save system. This is a common roguelike feature, and it is implemented to make the death penalty meaningful. However, "save scumming", the act of actively moving your characters save file out of the game directory to create a backup at a certain point in the game, allows you to "save" your game. This is generally frowned upon in the community, and is considered cheating. To add insult to injury, whenever your character dies, be it because he encountered one of the games many boss characters or made an action of poor judgement, his hostile ghost can now be encountered in the dungeon. Depending on how powerful the character was at the point of his death, this can become a major headache for future characters. It is again possible to remove the dead character's "bone file" from the game directory, and this is likewise considered cheating.

The second step of character creation is choosing your race. Depending on your race the gameplay can be radically altered, as some races act very unique in Crawl. For instance, the mummy doesn't have to eat, but as a consequence is incapable of drinking potions, removing an enormous "panic button" in form of healing potions from your character's repertoire. Apart from specific racial twists, each race also comes with its own restrictions on which classes the player can be, as well as specific skill aptitudes. As an example, a troll has an incredibly hard time learning pretty much anything besides clobbering enemies and eating their corpses, where as a mummy in uniquely adept in necromancy. The game features an enormous amount of races, detailed quickly below:

Because a character increases in skills depending on how he uses them, classes do not play as a significant role in Crawl than they do in other games. Your character is in no way restricted to develop solely in the direction he starts out in. It is possible for a fighter to eventually learn magic, how fast he does this depends on his race and how frequently he uses magic items. Your class bestows you with your starting equipment, as well as your starting skills, meaning you will start with specific skill at a certain level depending on your class. The classes of Crawl are broken up into four major groups: Fighter classes (not to be confused with the actual fighter class), Stealth classes, Religious Classes, and Magic Classes. There are a large amount of hybrids between these types as well, such as the Stalker, which is a stealth class with a splash of poison magic, or the Chaos Knight which is fighter who worships an evil god to gain divine powers. Many of the classes may appear to be very similar, but each has its own unique possibilities. 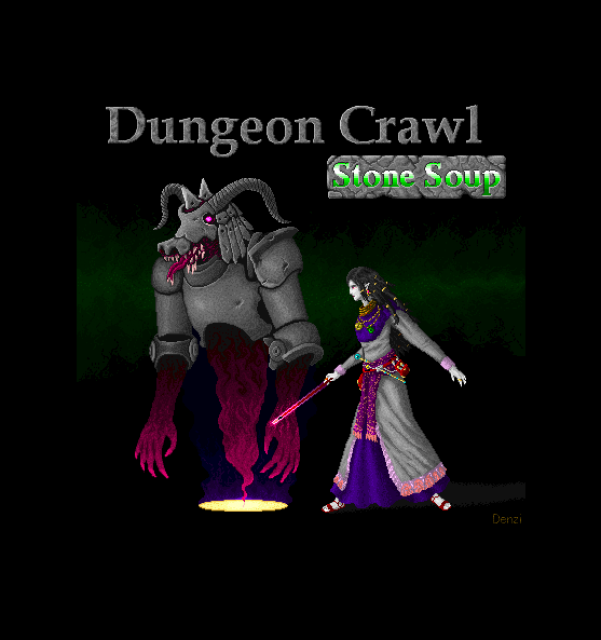