Take control of a fast-moving battle tank and take down other players (or team up against a variety of giant monsters) in a variety of destructible environments in this 2009 dedicated arcade game.

Tank! Tank! Tank! is a third-person vehicular combat game developed and released by Namco Bandai for arcades in late 2009 (October in Japan, December in North America).

A spiritual sequel to the 1995 Namco arcade game Tokyo Wars, Tank! Tank! Tank! pits four players (human or A.I.) against each-other as quick-moving combat tanks in wide-open destructible arenas. Along with a variety of weapon power-ups (from a standard Machine Gun to the single-use Colossus Missile), the game features an optional co-operative mode where players fight a variety of giant monsters. The dedicated sit-down arcade machines (which are linked together) feature heavy use of force feedback and "NAM-CAM" camera support (for player avatars, previously a feature in the Mario Kart Arcade GP series).

The game was later ported to the Wii U and released in two forms: one as a complete retail release and one as a downloadable free-to-play release (with DLC for levels and game modes). Along with local split-screen multiplayer for up to four players (with one player using the Wii U Gamepad), this version adds new maps, tank types, and game modes (including a Story Mode and an asymmetrical multiplayer mode using the Gamepad).

Each player controls a tank and can compete in 3 different game modes. Players control their tanks using a steering wheel and forward and reverse pedals. Both the seat and the steering wheel shake when firing a shot or being struck by one. The game includes multiple power ups for your tank, including the Plasma Bolt, Machine Gun, Missile Rack, Colossus Missile, and Mega-Beam. Before the start of each match, each player can have their picture taken by a camera included with the cabinet or the Wii U gamepad and choose one of many different costume overlays to include with it.

The Wii U version of the game is played with the Wii U gamepad and Wii remotes. Tanks are controlled with the Wii remote. Players hold the remote horizontally in their hands, using the directional pad to move their tank around while hitting A to fire. Players lock on to their targets and can destroy the environment to dig up upgrades that increase their fire power or armor.

In multiplayer, one player uses the Wii U gamepad to control the level's boss. The player uses the controller's screen to control their character and can tap the screen to unleash powerful attacks such as devastating stomps and barrages of missiles. The front facing camera of the controller lets players put their face into the game as the boss's face. 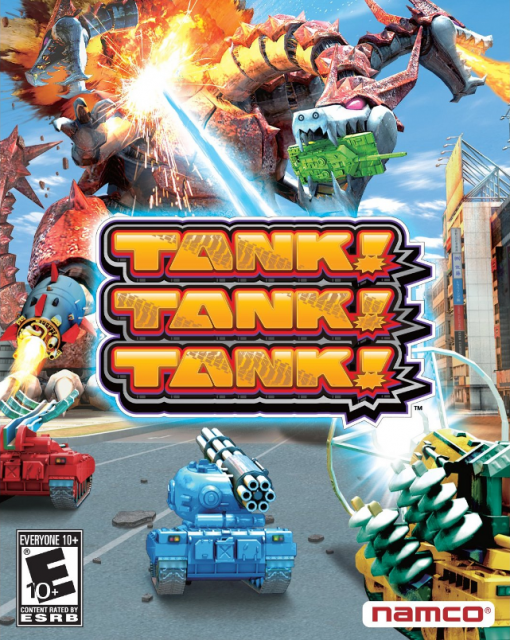