An action-packed, deliberately-retro parody of video games and pop culture from the era of 8-bit game consoles, Retro City Rampage is a nostalgic twist on the mass-mayhem open-world action of Grand Theft Auto.

Retro City Rampage is a 2D indie deliberately-retro open-world action-adventure game developed and published digitally by Vblank for the PC (via Steam and GOG), PlayStation 3, and PlayStation Vita (both via the PlayStation Network) on October 9, 2012.

Inspired by the Grand Theft Auto franchise, players control a character from a high top-down perspective with the intent to cause as much mayhem (and other criminal activity) in the large city as possible. The game is stylized to resemble games from 8-bit consoles (such as the Nintendo Entertainment System and Sega Master System), with careful attention to detail (including a restrictive, yet customizable, color palette). The game also features numerous homages to (and parodies of) video games and other pop culture of the 1980s (and early 1990s). A 16-bit sequel, titled Shakedown Hawaii, is still in development.

Players control The Player, a small-time thug-for-hire working as a henchman (for criminal mastermind The Jester) in the city of Theftropolis. During a bank heist gone wrong, Player finds a time-traveling telephone booth, which transports him to the future (circa year 20XX). With the time machine broken, Player must help Doc Choc (a scientist who mistakes the Player for a time-traveling hero) gather the parts needed to repair the time machine while doing other odd jobs, avoiding law enforcement, and foiling the plans of Doc's rival, Dr. Von Buttnik.

The game was later released for the Xbox 360 (via Xbox Live Arcade by D3 on January 2, 2013) and Wii (via WiiWare on February 28, 2013). It later received an enhanced port for the Nintendo 3DS (released on the eShop on February 6, 2014) as Retro City Rampage DX, adding new gameplay mechanics and visual effects. These changes were brought over to other platforms on November 2014. While it was updated for free for the PC, XB360, and Wii versions (with the PC version adding support for the Mac and, on July 29, 2015, Linux platforms), the PSN version required a separate purchase (with added support for the PlayStation 4). This version was later released for iOS devices (on March 10, 2016), the PlayStation Portable (also via PSN on July 19, 2016), and Android devices (on December 13, 2016).

A unique port of the game was digitally released on July 29, 2015, free for owners of the PC version, that is supported on early-'90s MS-DOS computers. Titled Retro City Ransom 486, it is designed to install from a single floppy disk and contains most of the original game's features intact (notably losing digital sounds and music but adding DOS joystick support). A prototype version for Windows 3.1 was released alongside this version. Alongside the digital release, this version also received a limited-edition paid boxed release (with the game's installation files on a working floppy disk).

RCR is an open world game in the style of Grand Theft Auto, and the player is free to go wherever they want to at any time. The map shows blips where missions can be started, either story missions (blue) or side missions (yellow). If the player commits any crime while a police officer is nearby, they will chase down the player, and as his crimes escalate, more police will gradually chase him, with the army intervening with tanks at the highest wanted level. Health is replenished by either picking up hearts or buying food from vending machines.

The story missions have a range of gameplay. Some missions play like classic NES games, for example one of the first missions plays like Paperboy, where the player has to deliver leaflets by throwing them into mail boxes. Other missions are similar to ones found in GTA games, such as travelling to the other side of town to kill a target, or tailing a car.

There are also minigames; Nolan's Arcade, named after Atari founder Nolan Bushnell, features a light version of Bit.Trip Runner and a 'test your might' game like the one from Mortal Kombat. When driving a taxi, players can start a taxi driving minigame. Spread across the map are 'rampage' icons where the player has to cause as much damage as possible with a specific weapon in a limited amount of time.

Player's appearance can be customised. There are numerous shops around town where players can get a new haircut, tattoos, sunglasses, or even a 'face transplant' to look like the game's developers, or other real life personalities ranging from fellow indie developers to even some games journalists.

As the title of the game suggests, Retro City Rampage has a deliberately retro look to its design that evokes games of the 8-bit era. The game's title is even patterned after that of the NES game River City Ransom. Retro City Rampage also references other titles of the era, such as a stage that resembles the second stage of Contra, but from the top-down perspective.

Retro City Rampage allows users to use a range of display filters which pay homage to classic gaming machines:

The game features a wide variety of weapons ranging from fists, all the way to an NES style light gun. Entering the Konami Code at any point in the game gives players access to all of the weapons.

Not only does the game feature numerous references to NES games, there are also a lot of references to old TV shows too; the A-Team's iconic van appears as a vehicle called the 'T-Squad', and the 'Generaly' is a muscle car with a confederate flag on the bonnet, similar to the General Lee from The Dukes of Hazard. Doc Choc's appearance is very similar to Doc Brown from the Back to The Future films, and appropriately his car resembles the infamous DeLorean. A lot of these references also appear indirectly as shop names and billboards. There are also place names in the game, such as Granville Zone, that are named after real locations in Vancouver, the developer's home town, as well as an area called 'Primate Peninsula'. 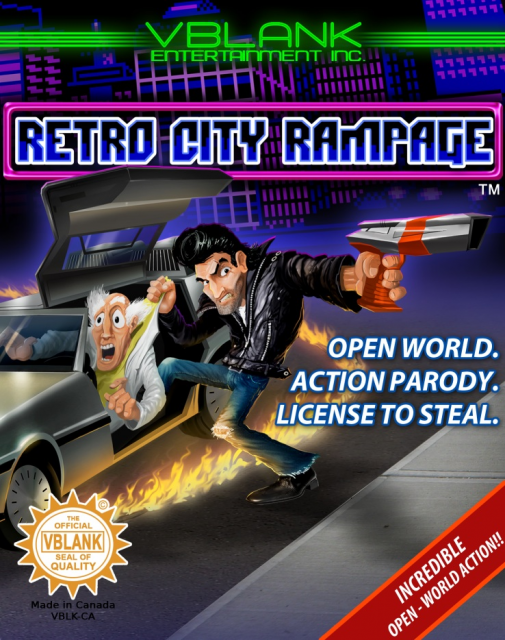