Mario Kart 7 presents some rather significant shifts in the gameplay. Tracks now feature airborne and underwater sections; depending on the context in which players find themselves, karts will deploy a hang-gilder or propeller in order to navigate the environment, and control of the kart will adjust accordingly. Kart customization is also featured with the player being able to choose a chassis, wheel type and a hang-glider. Mario Kart 7 is also the first game in the series to offer a first-person perspective, seeing the tracks up close. This allows you to tilt your 3DS as if you were the driver. (There are no mini-boosts if you're tilting the 3DS). Time trials can now be undertaken with up to seven other ghosts simultaneously.

Coins make their return for the first time since Mario Kart: Super Circuit. Coins can only be earned throughout Grand Prix, and will unlock kart customization's. Collecting coins will increase the speed of your vehicle and if ten of them are collected, it will be at max speed. Also returning is the trick boost from Mario Kart Wii which allowed players to perform a trick when driving off a ramp to gain a small speed boost. This game will also utilize the same mechanic as Mario Kart Wii to handle drifting, in that boost is built up over time, to prevent the snaking tactic which was prevalent in the online component of Mario Kart DS. Battle Mode also returns, comprising of Balloon Battle (with or without teams) and Coin Runners and this time, it will have a time limit of two minutes instead of three. Also returning in this game is the traditional eight racers at a time, which was used in the first 5 installments along with the rocket start technique at the start of the race.

The game will feature online multiplayer racing with between two and eight players, running at 60fps, as well as the ability to exchange ghost data with friends. Players can compete against random players online, players in their 3DS friends list or players that they have raced against previously (dubbed 'rivals'). Players now have Player Cards which keeps track of things like favorite character, favorite kart load out, coins collected, win/loss record etc. These cards can be exchanged with other players via StreetPass, doing so will allow players to race against the Mii of the person with whom they StreetPassed, and is used to unlock more parts for players' karts.

Another new multiplayer feature is the inclusion of Communities, online groups with customized rule sets (e.g. only heavy characters at 150cc on Star Cup tracks). Players can create their own Communities and invite other players, either via local wireless or via a 14 digit code. It will also be possible to search for Communities online, and the top one hundred most active Communities will also be visible in the Mario Kart Channel (which returns from Mario Kart Wii). Additionally Spot Pass will be used to push new Communities to the player as well as new ghost data. 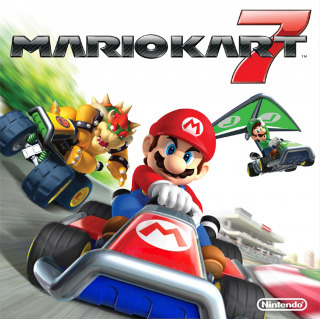