A "BRUTAL" action RPG for the PSP, and spin-off of the arcade-exclusive card battle RPG Lord of Vermilion. Developed by Access Games and directed by Hidetaka "Swery" Suehiro.
PlayStation Portable PlayStation Network (PSP)

A spin-off of the Japanese arcade exclusive Lord of Vermilion series, Lord of Arcana is described by the developers Access Games as a "Multi-action game". It supports up to four-player multiplayer, and features gameplay similar to that of the Monster Hunter series. The tagline from the official promotional video is "Transcend the Hunter - Become the Slayer".

On the 9th of September, it was announced that Hidetaka "Swery" Suehiro would take the role of Development Director on the game.

This world is called Horodyn, so named for its first king.

At the edge of a village surrounded by a huge forest lies the powerful stone Arcana,

the source of all order in the world. It is said that only one with power can acquire Arcana.

Slayers annihilate hordes of monsters so that they could lay their hands on Arcana.

What powers does it hold within? And to what destiny is one with Arcana bound?

Lord of Arcana takes place in a dark fantasy setting.

The game appears to focus on big monster battles, and the official gameplay trailers have all linked the different monsters to specific quests. But the promotional video also showed several quite different areas the characters can traverse. In this world there will be a

, where you obtain quests, a blacksmith where you can create or upgrade weapons and equipment, an alchemy and an item shop, and a guild house where members can gather.

The collection of different raw materials during quests will be vital to create and upgrade equipment, as well as for creating items in the alchemy shop.

The game employs a J-RPG style

, where you see monsters and enemies represented in the world you travel through, and battles are engaged by approaching them.

The fights themselves are in real-time, and will incorporate

As in Lord of Vermilion, the monsters in Lord of Arcana are many and varied, and they appear to have gathered a

plethora of more and less well-known beasts from all kinds of mythologies and works of fiction, for example

, Nidhogg and Grendel, but also reimaginings of more generic concepts, such as Phantom,

The monsters' designs are based on how they appeared in Lord of Vermilion, which were all designed by several different great artists from different styles and parts of the world. Nidhogg was for instance designed by

is mostly a remix of the progressive and hard rock themes from Lord of Vermilion, composed by

. The game also makes use of tracks from Lord of Vermilion II, composed by 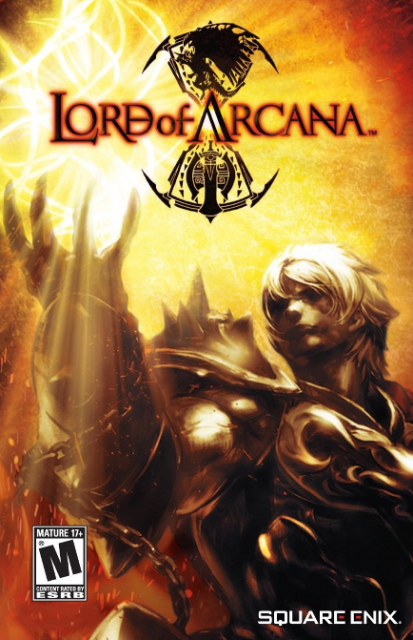