Disgaea 4 continues the epic saga of the Netherworld. The game boasts major graphical improvements, a slew of new characters, as well as improved gameplay mechanics to provide the ultimate next-gen Disgaea experience.
PlayStation 3

The story of Disgaea 4 follows the exploits of Valvatorez, a vampire of sorts, who is leading a coup d’état in the Netherworld. The protagonist starts as a lowly prinny trainer, content to live his life obsessing over sardines. When the "corruptorment" calls for the destruction of all the prinnies due to a lack of space in the Netherworld, the protagonist takes offense as he promised each prinny a single sardine for graduating and soon sees the safety of the prinnies as his responsibility. With the help of his loyal aide Fenrich, the dubious help of prison warden Axel, an "unprinny" girl from Earth, and a wannabe End Boss, he fights back against the corruptorment and the forces behind its unusual recent acts.

As in prior games of the series, Disgaea 4 is a strategy roleplaying game. The main quest takes the player through dozens of dungeon levels, seperated into groups. These levels can all be played repeatedly to grind out levels or obtain better loot. The player can utilize up to ten characters per dungeon, selectable through a home base. These characters range from warriors, mages, and thieves to prinnies (the series' penguin-like mascot of sorts), dragons, and mushrooms. Each character can be reincarnated, and with the exception of the main characters, can take on new roles to learn more skills.

The game also features the Item World, a series of randomized dungeons that can increase the stats of any item in your inventory. The Item World can have up to 100 levels per item, and the player must fight through 10 levels of the dungeon in order to escape or return home, unless the player uses a special item that allows them to escape the dungeon early.

The game (and series) features power leveling. Any character can become up to level 9999. This is purely optional, as the main quest won't require you to level nearly that much. The game basically allows the player the amount of depth that he or she chooses. Ripping through the main quest will require some grinding, but not nearly as much if they choose to complete the Item World or seek out the optional dungeons.

The developers of Disgaea 4 stated that the game will be a "huge evolution" in the graphics department, when compared to the previous entries in the Disgaea Franchise.

The gameplay is very similar to the previous Disgaea games, but a few notable features have been added or changed.

The graphics engine has been completely overhauled from the previous games, offering a vivifying breath to the characters. The animations have been reworked or enhanced, as well as the sprites.

Here is a sprite comparison, comparing a Disgaea 3 vs. a Disgaea 4 in HD:

Originally in the interrogation part of game, the characters that were being interrogated were supposed to be sit on a wooden horse chair. However due to censorship in Japan, the chair was replaced with a cat statue.

Formerly known as the Tyrant, Valvatorez now works as Prinny Instructor, teaching souls that just became Prinnies how to work. When he realized that the government of Netherworld known as Corruptment decide to kill Prinnies because there are too many of them, he decided to start to revolution and usurp the Corruptment. He has high obsession on keeping promises and sardines, due to certain event in the past.

Loyal steward of Valvatorez. Ever since he was saved by Valvatorez, he has decided to dedicate his life for him. Fenrich will support Valvatorez so that he can become a supreme ruler, however his dream to make Valvatorez supreme ruler was ruined to certain event in the past. Even though Valvatorez became a prinny instructor, he still follows him giving him supports every way he can think of.

Girl who was sent to hell, and was supposed to become prinny as well. However due to sudden increased number of prinnies and shortage of supply to make proper prinny suit, Fuuka was just given with a hat a suit. She refused to believe that she was to sent hell, claiming that she never done anything evil enough to get sent to hell. She convince herself that everything is her dream, denying the fact that she was sent to hell with reason.

Son of Death himself, who is also president of Netherworld and corrupternment. As the son president, Emizel became a bit arrogant, only to use his father's influence. When he was defeated he finally realized he was nobody without his father's influence, and things got worse for him when the news of his death was spread. Unable to prove that he still alive, Emizel decided to prove that he is alive by proving his real self, not as son of president.

Self-proclaimed final boss, an ultimate weapon created by human. Even though she is "Final Boss", she appears early in the game. She is defeated by Valvatorez, but he decided to teach her how to become a proper final boss. Ever since she joins the party, Desco calls Fuuka her big sister. It seems that she is somehow linked with Fuuka's death.

Some of the characters can be unlocked after the beating the game's main story line. Other characters however can only be unlocked through method of DLC. 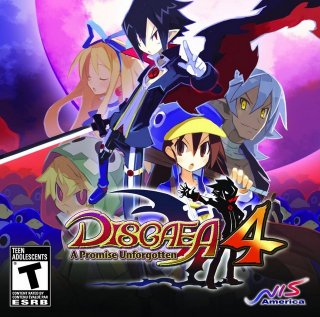