A pool simulation game released for the Saturn and Genesis and the sequel to the 1987 game Side Pocket, featuring famed billiards player Rudolf "Minnesota Fats" Wanderone.

Minnesota Fats: Pool Legend (known in Japan as Side Pocket 2: Densetsu no Hustler) is a top-down billiards game developed and published by Data East for the Sega Saturn (in both North America and Japan) and Sega Genesis (in North America only) in 1995.

The sequel to the 1987 game Side Pocket, Pool Legend features the name and likeness of famed pool hustler Rudolf "Minnesota Fats" Wanderone. While the game plays nearly identical to the SNES and Genesis versions of its predecessor (including the series' signature power and trick gauges and Trick Mode), the game replaces the arcade-style Pocket Game with traditional 8-Ball, adds a new Story Mode, and adds several rule variations.

The game's Story Mode changes between versions, with the Genesis version having the player (as an unnamed pool hustler) challenging Minnesota Fats and his rookies in his pool hall and the Saturn version having the player (as Minnesota Fats himself) touring the United States to challenge rival hustler "Big G" and his lackeys. The Saturn version features full-motion video cutscenes. 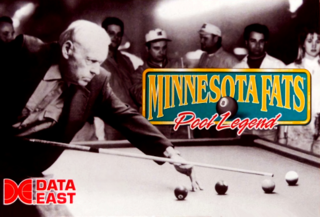