Alterntiva is a science fiction point & click adventure game from the makers of Memento Mori.

AlternativA is a point and click adventure game set in a dystopian future Prague. It follows the story of Richard who has recently been fired from his job and is thrust into a fight against the totalitarian system that rules the world.

The gameplay is a classic point and click adventure with puzzles to solve, items to find and people to talk to. It features 3D models moving over a pre-rendered background, much like Grim Fandango or The Longest Journey with pre-rendered cutscenes intermixed in the gameplay. Unlike traditional adventure games, you can possibly die in the game if you choose the wrong dialog options and the game gives you an option when you start whether you want it to be easy or normal, which pertains to the amount of reloads you're allowed when you die. Together with the basic inventory you have a PDA which is sometimes used to solve puzzles, but is also used to contain database entries which describe the lore of the universe. 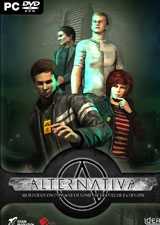