A fighting game made by Ganbarion for the Nintendo DS.
Nintendo DS

Once a secret game known as Project Jet  was revealed to be One Piece: Gigant Battle.

One Piece: Gigant Battle is a fighting game by Jump Ultimate Stars developer Ganbarion, and as such has similar gameplay to JUS.  The game features 17 playable characters with over 45 Support characters. The story takes place on the Sabaody Archipelago.

There are currently no plans to release this in any other region.

One Piece: Gigant Battle features 4 modes of play. The Great Pirate Grand Prix serves as the sort campaign mode and you progress by selecting various points on the map it's laid out on. Each stage has a level indicator to let the player know how strong the opponent they're about to face is beforehand. Here you'll earn money, level characters, progress the story, etc.. The Thousand Arena is the basic arena mode where you simply fight opponents. Network Play for both wireless and download multiplayer. And Training is where you'll go to practice you fighting skills.

In Pirate Team Edit, you can set up a team composed of your various favorite characters to pit against other players.

Fighting and the Gigant Gauge

The fighting in One Piece: GIgant Battle takes place on a 2D plane. Items can be used and some items can be picked up and used offensively. Basic attacks are modified by pressing different directions on the D-Pad. When a player guards at last second, it is called a  Bingo. A Bingo blocks all incoming attack damage. Bingo also increases the Gigant Gauge.

Pressing L or R and all face buttons (A,B,X,Y) with a full Gigany Gauge and full Gigant Points causes the character to enter Heat mode. Heat mode gives character a major stat boost and makes them stronger, but also drains health while character is in this mode.

Characters Level up with each battle and unlock Stat Points. Players can allocate Stat Points in one of 5 categories: Health, Attack, Special Attack, Items, and Support. Players do not have access to all of the characters' special attacks and have to unlock all of character's special moves by buying them with the money earned in battles.
Jump Ultimate Stars Jump Super Stars One Piece Grand Battle: Swan Colosseum Cartoon Network: Punch Time Explosion Katekyo Hitman Reborn! DS Flame Rumble: Mukuro Kyoshu Croket! DS: Tenkū no Yūsha-tachi 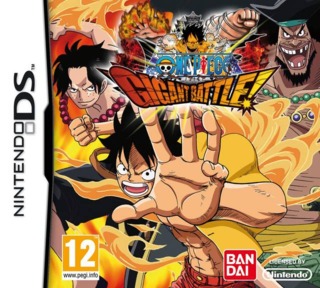