Spyro and friends are toys come to life in this new 3D platformer from Toys for Bob and Activision.

Skylanders: Spyro's Adventure is technically the second franchise reboot of Spyro the Dragon. Spyro's return was initially envisioned as a dark, bloody action game, but developer Toys for Bob grew uninspired by the idea and started work-shopping new ideas that the company's next game could use instead. Eventually they partnered with Activision and RedOctane to develop Skylanders, an unrelated fast-paced action-RPG (platformer on the 3DS) featuring toys that come to life inside the game world. The Spyro the Dragon brand was re-added later because of its marketable name in gaming.

Skylanders takes place in a universe known as the Skylands, which the Skylanders have made it their mission to protect. An old enemy by the name of Kaos arrived one day, and banished the Skylanders to Earth as toys. The player takes on the role of the Portal Master, in charge of bringing the toys to life and voyaging through the Skylands to once again set things right. The story was written by Alek Sokolow and Joel Cohen, who both worked on the Pixar film Toy Story. The musical score was composed by Hans Zimmer.

The 3DS version takes place in the Radiant Isles, a different realm from the console Skylanders. In this version, the Skylanders face a force of darkness commanded by an enemy named Hektore.

The game got released in Japan in July 2013 while also making its debut on Wii U.

The distinguishing feature of Skylanders is the unique interface of the toys that come with game. A glowing platform called the "Portal of Power" connects to the gaming system, and players can place any character figurines and power -ups on the platform. These figurines then appear as characters in the game. At any time during play, players can swap out figurines on the platform to choose which characters they want to play as. The RFID-tagged figurines retain the names, statistics, and experiences you give them when they're not in play -- and they're platform-agnostic, meaning they can be played with any version of the game.

The Portal connects wirelessly to the PS3 & Wii, and is a wired connection on PC and Xbox 360. On the 3DS it communicates via the system's infrared port. Since the portal is not communicating with the 3DS constantly, the game mechanics of the 3DS version have changed so players download two characters into each game session, then switch instantly between those characters at any time.

The game also supports other non-character figurines: there are four Adventure Packs to buy separately that contain a character, a level, and two power-ups. Toys For Bob have stated that no downloading is necessary to make use of the new levels or power-ups.

Though the game can be completed with the three characters included in the Starter Pack, the game encourages you to collect more figurines by assigning each figurine one of eight elements, and locking certain bonuses and level segments behind gates that can only be unlocked by characters with that gate's element. To access all on-disc content, players must purchase at least one character from each element.

Skylanders is an action/adventure platformer that has 22 levels to complete. Each of the 32 playable characters has an "element" assigned to them, and certain levels give a damage bonus to one of the elements. As players defeat enemies, they gain experience points, which level up the character and allows them to buy upgrades. Each character has a different primary and secondary attack, each of which can be upgraded as the character levels up. Players can also equip various hats on their Skylanders, which will give them a boost to their stats. Two figurines can be dropped onto the Portal for local co-op play, and there is also a PvP battle arena where players can go head to head against each other.

The 3DS version features significantly different gameplay, and is more of a platformer than the console versions. Players will have to collect crystals to progress, and also have the ability to jump & double jump.

There are a total of 32 unique playable characters, 4 in each of the 8 elements, although only about half of them were available at launch. (The rest were released a few at a time over the ensuing months, with the last of them being released in the beginning of April 2012.) Each one has it's own unique attacks and base stats in Strength, Agility, Defense, and Luck. (Palette-swaps & limited/"legendary" editions do not count toward the total 32):

The console/PC versions of Skylanders come packed alongside a Portal Of Power and three figurines: Spyro, Gill Grunt, and Trigger Happy. In addition to this, players also get three trading cards, a sticker sheet, a coloring book, codes for Web integration, and a poster depicting all 32 collectible characters.

The 3DS version comes with a mini-Portal Of Power and three figurines: Dark Spyro (exclusive to the 3DS version), Ignitor, and Stealth Elf. 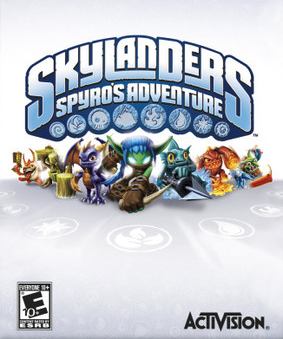