Presenting an original story in the same franchise as the comic book series of the same name, The Walking Dead is a five-part adventure game from Telltale that follows the story of a convicted murderer, his guardianship over a young girl, and his co-operation with a roaming group of survivors in a zombie apocalypse.

The Walking Dead is a five-part horror point-and-click adventure game developed and published digitally by Telltale for the Xbox 360 (via Xbox Live Arcade), PlayStation 3 (via PlayStation Network), PC, Mac, and all iOS devices. Episodes were periodically released between April 24, 2012 and November 21, 2012.

Set in the same universe as Robert Kirkman's comic book series of the same name, players follow the story of Lee Everett, a 37-year-old convicted murderer who gains a second chance in life (as the guardian of a 8-year-old girl named Clementine) throughout Georgia, U.S.A. at the beginning of the undead apocalypse. Like the comic book and television series of the same name, the game focuses on creating interactions between the human characters, rather than killing large numbers of the undead.

Making moral decisions is a pillar of the series, complete with branching consequences that tailor the player's story to the pressured choices they are forced to make. Characters met throughout the story learn from and react according to dialogue choices Lee makes, which affect minor parts of the story. Telltale would use this style of gameplay as the basis for their later adventure games, including The Wolf Among Us, Tales from the Borderlands, and Game of Thrones.

On July 2013, the game received a special downloadable chapter (for all platforms, with the Vita, XONE, and PS4 versions released at their respective game launch dates) titled "400 Days", which chronicles (in a non-linear narrative) five stories of five unrelated survivors near an abandoned Georgia truck stop at different dates (between the beginning of the outbreak to 400 days after). The game would later receive multiple sequels and side-stories, some of which support save file importing (allowing players to carry player choices between games).

Players take control of the main character Lee Everett and guide him through his survival of the zombie apocalypse. Players have full control over the character's movement, and using the on-screen reticule, can interact with and use objects. Players will have to search through shelves, cars, and other objects to survive and help other people.

The game focuses on interactions with other human characters through dialogue trees, often with limited time to make a choice. Characters will remember things that players have said before and will often notice discrepancies in the player's dialogue. These interactions can also affect where the story progresses as well.

Combat isn't a priority in the game, and is handled similarly to the rest of the gameplay, only more urgent and time-based. Players will find themselves needing to use items that they've gathered throughout the game to chop down zombies or load guns with bullet shells they've found laying around. Choices that players have made previously can also affect how players fight against zombies, such as possessing different equipment or having other characters' assistance.

Due to the game being separated into episodes, this section will cover the main characters, who have appeared in more than one episode. For the "secondary" characters, check the episode section in which they appear.

Introduced in Episode One ("A New Day")

Introduced in Episode Four ("Around Every Corner")

Due to the branching nature of the storyline in The Walking Dead, not all the specific choices have been listed. Instead, just a basic outline of the main story elements are described below.

Set shortly after the initial outbreak, the story starts out following Lee Everett, who has been arrested in Atlanta and is being transported out of the city in a police car. After a car crash, he escapes into a small nearby neighborhood already hit by invading zombies. He soon meets 8-year-old Clementine, a girl who has been hiding out in her tree house for a few days waiting for her parents to come home. They set off to find a safe place nearby in case her parents return from their vacation. they soon meet up with other survivors, as well as several characters from the graphic novel's original storyline such as the Greene family and Glenn. After spending some time at Herschel Greene's farm they leave and encounter another set of survivors holed up in a pharmacy, and it is revealed that the (assumed dead) owners of the pharmacy are Lee's parents. After going to a local motel to siphon gasoline, they return to the pharmacy, which is soon overrun with zombies and they flee back to the motel.

Episode 2 starts three months after the end of Episode 1. The group is still holed up at the motel, but food and water are in short supply, and the group is going hungry. They soon encounter a couple of people that are living at the nearby St. John Dairy Farm, and the group is invited to come have some food & shelter. Some members of the group are suspicious of these newcomers, but the group decides to accept their offer. Lee agrees to help out around the farm, but encounters bandits in the nearby woods and a member of the group is injured by an arrow. The farmers agree to treat the injured group member, but soon after it becomes apparent that there are ulterior motives at play. Just as they are about to sit down for the meal Lee discovers that the dairy farmers are cannibals, about to serve them the flesh of their injured friend. The farmers become violent and Lee is knocked out, the group is kidnapped then locked in a storage shed. They soon escape the room, rescue other characters from the farmers, and flee into the woods. The episode ends with the discovery of an abandoned station wagon filled with food and supplies, the owner of which is a mystery.

After the shocking events at the St. John Dairy Farm, the remaining group members return to their haven at the motel. Lee and Kenny are delegated to scavenging supplies from a nearby drug store, however upon their return, there is friction as Lilly has suspicions that someone is stealing provisions. Meanwhile, Kenny insists the group needs to move on and head for the Atlantic coast. He gets his way, although through circumstances no one is happy with. Over the course of the episode, tensions start to reach a breaking point as the group starts to crumble. A few characters perish, while another leaves. A few new faces are introduced as well: Chuck, Christa and Omid. Lee starts to teach Clementine how to protect herself, by teaching her how to shoot a gun, and keeping herself safe by cutting her hair to a much more suitable length. Eventually the group is able to successfully start up and operate a train engine. As the group arrives in Savannah, the episode then ends with Lee hearing a strange voice on Clementine's walkie talkie.

Episode 4 – Around Every Corner

The group arrives in Savannah, finding the city vacant. A church bell rings, drawing a zombie horde towards their location. The group escapes the herd by taking up residence in an abandoned home. While Christa attends to Omid's wounds, Lee and Kenny head to the waterfront to look for a boat. Although they don't find any working boats, they do encounter some new survivors. These survivors, Molly and Vernon, warn Lee of a ruthless survivor community within Savannah known as Crawford. Upon returning to the group's temporary home, Clementine shows Lee a working boat kept in the house's garage. In order to get fuel for the boat and medicine for Omid, the group makes a stealth raid of Crawford. Disaster ensues and the group narrowly escapes Crawford with the supplies. Once safe at home, Vernon offers to take Clementine back to his group. While considering Vernon's offer, Lee falls asleep watching Clementine. Lee wakes up to find Clementine and the new survivors missing, and suffers an unfortunate injury while frantically looking for her. The chapter ends with another message from the walkie talkie.

After a conversation over the walkie-talkie with the anonymous captor of Clementine, Lee is now determined to rescue her. Not long after, his aforementioned injury means for some distressing decisions. Lee then climbs to the roof of the hospital and makes his back to where the boat was located, only to find a note from Vernon explaining he has taken it. After a while, Clementine contacts Lee, revealing she is being kept in a hotel on River Street. Upon arrival, Lee is greeted by the captor who describes his situation. His insanity is slowly revealed, causing a fight to ensue resulting in his death. Finally reunited with Clementine, Lee makes for a plan to escape Savannah with her. Sadly, Lee's injuries overcome him and can no longer carry on. Reaching a secure location with a trapped police officer-turned-walker, Lee advises Clementine to take the gun and handcuff himself to the wall. Realizing Clem has the capability to take care of herself, they have a tearful farewell as Lee passes away.

Clementine, now alone, finds her way to the countryside and spots two figures in the distance. Suddenly, they stop and direct their gaze upon her. 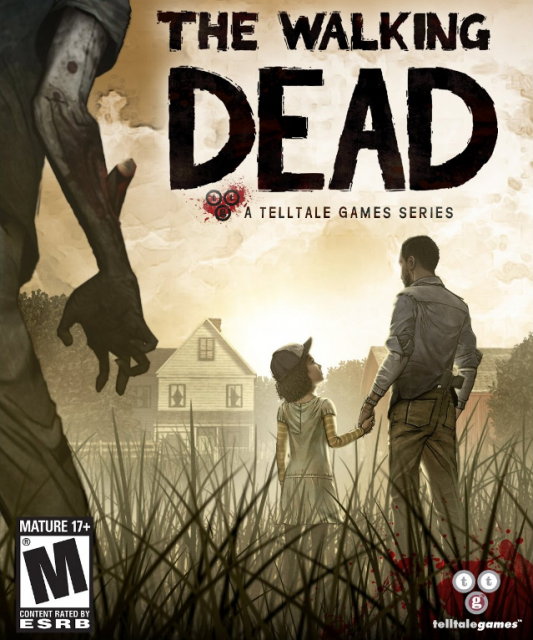