Shin Onigashima is a two disk adventure game released on the Famicom Disk System. Despite being first-party software, it was never released outside of Japan.
Game Boy Advance Wii Shop

The game is depicted like other adventure games for the system, such as Portopia or Hokkaido Serial Murders, though with a far gentler fairy tale presentation rather than a gritty crime thriller. The game's story is based on popular centuries-old Japanese folklore, such as the story of Momotaro and tales depicting the demonic Oni and their mischief.

The original characters created for this game would be later referenced by future Nintendo products with retrospective elements, such as Captain Rainbow or the Super Smash Bros series (SSB Brawl even had a remixed version of Shin Onigashima's music for the Ice Climbers stage). 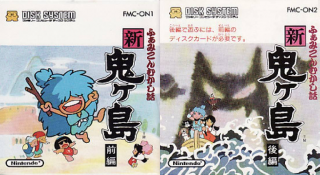