The first major 2D entry into the world of "open world" sandbox action-adventure games, Terraria is inspired by 16-bit platformers and allows players to mine for ores, craft new equipment, and fight monstrous bosses in a large procedurally-generated world.

Terraria is a 2D indie fantasy action-adventure open world platformer developed and published digitally by Re-Logic for the PC (via Steam) on May 16, 2011. Along with numerous updates, it was ported to a variety of platforms throughout the years.

Originally built in five months with the XNA Framework by a small team (led by Andrew "Redigit" Spinks, best known for his Super Mario Bros. X fangame), Terraria is a 2D platformer with elements of Minecraft, putting emphasis on exploration, mining, crafting, and combat with hostile creatures in a procedurally-generated sandbox environment. As players earn their footing by crafting better equipment, they progress through the game by defeating bosses found throughout the world (one of which makes the entire game harder while unlocking new ores for better equipment and new biomes to explore).

Along with numerous updates over the years (enhancing the world generation system and light rendering while adding a large variety of new monsters, items, and gameplay mechanics), the game was released DRM-free on other digital storefronts (including GOG.com and the Humble Store) on October 2, 2014 and was made compatible with Mac and Linux systems on August 12, 2015.

A spin-off to the game, titled Terraria: Otherworld, was in development by Re-Logic alongside Pipeworks Studio (who took over after Engine Software left the project). Set in an alternate dimension within the Terraria universe, players would have had to restore a once-pristine world from a never-ending wave of "corruption". In April 2018, it was announced that development on Otherworld had been cancelled.

Terraria invites the player to explore or dig for building materials, while also continually spawning monsters off-screen. The game challenges the player to immediately start to come up with solutions to questions of shelter, housing, protection, fast travel and ultimately aesthetics and automation. Different armors, weapons, equipment and access to NPCs and Bosses add RPG like progression and enable the player to seek out increasingly difficult depths and environments. Player characters can travel between different offline worlds and online servers, thus making all resources infinite, encouraging heedless creativity, rather than economical resource management.

The worlds in Terraria are randomly generated based on the size of the world selected by the player, with several defined Biomes:

Each zone spawns a specific set of monsters, treasure, ore, and/or plants. For examples, glowing mushroom biomes will have large mushrooms instead of trees, The Corruption has dark, corrupted versions of normal enemies, and Hell is filled with lava and demons.

Water and lava exhibit dynamic properties, and the creeping growth of plants, crystals, and even corruption and hallow mean the world is constantly shifting, almost beyond the player's ability to control i. There is also one randomly generated dungeon per world for the player to explore. Pots and treasure chests will be randomly placed for players to find valuable accessories to equip with game-altering affects, such as a "Red Baloon" that increases jump height, or "Hermes Boots" that improve run speed.

Buildings and items are created using materials the players gather themselves from the world. Trees can be chopped down and replanted, and various types of dirt and ore can be gathered. Some Crafting stations are created by placing objects on or near each other (For example, placing flasks on a table makes an Alchemy station) while others such as Furnaces are crafted from other items and then placed on a flat surface

Players have no improvable stats beyond health and mana. Health increases by finding and breaking open underground Heart Containers with a pickaxe, dropping a Life Crystal item which allows for a permanant 20-point HP increase, up to a cap of 400 HP. After the player has killed the Plantera boss in a world, life fruit will spawn in the Jungle, increasing the maximum HP cap to 500 HP. Mana is increased by collecting 10 falling stars (which only appear at night), and combining them into a Mana Star, which increases maximum mana by 20 points (maximum mana caps out at 200 before accessory modifications).

Beyond those two stats, player advancement is accomplished by improving their equipment and accessories via exploration, discovery of chests, and destruction of monsters and bosses.

NPCs are attracted to player-built structures based on certain conditions met by the players in the game. The NPCs are attracted by closed off rooms or "houses" that they can each claim as their own and can be assigned to different rooms via the housing interface. For example if all players have 50 silver, a merchant will appear. If a player has more than the default starting health, a nurse will appear.

The basic criteria for a "house" are:

As of 1.4.0.1, NPCs have a happiness mechanic, tied to various conditions of their house. Being too close to too many other NPCs, living in a biome they like or dislike, or living near another NPC they like or dislike will all impact their happiness, causing their prices to fluctuate accordingly.

There are 29 total NPCs in the game, however only 26 of them can become permanent residents of a world. Before entering hardmode, the NPCs that can move into a world are the Guide (who is present from the start of a new world), Merchant, Nurse, Demolitionist, Dye Trader, Angler, Zoologist, Dryad, Painter, Golfer, Arms Dealer, Tavernkeep, Stylist, Goblin Tinkerer, Witch Doctor, Clothier, Mechanic, and Party Girl. In hardmode, they are joined by the Wizard, Tax Collector, Truffle, Pirate, Steampunker, Cyborg, Santa Claus, and the Princess. As well, the Zoologist sells pet licenses, which allow three pet NPCs (a cat, a dog, and a rabbit) to live with a chosen NPC, improving nearby NPC happiness.

The NPCs which can not permanently move in to a house are the Old Man (who becomes the Clothier upon Skeletron's defeat), and the Skeleton Merchant and the Traveling Merchant (both of whom spawn randomly at the beginning of each day, and disappear at the end of each day.)

The game is designed with multiplayer in mind, so players can start a server and invite friends. The player character can be used in any of the player's worlds, and online servers as well. When starting a server, it can be hosted on any world. This can save a lot of repetition of advancing a character or world when wanting to play with friends. Flags exist for Player versus Player game modes, with choices of team color to set player damage. Certain items exist with player/terrain damage in mind, such as thrown grenades that only hurt players and bombs that damage both players and terrain.

Terraria has received over fifty updates since release. These have included numerous improvements, from bug fixes, to quality of life features, to additional items, enemies, and bosses, and more.

Below are some of the most noteworthy updates in the history of Terraria, although by no means the only ones.

Released on December 1, 2011, version 1.1 overhauled the game with the introduction of hardmode, a new endgame locked behind a new boss. Also in the update were:

Released on September 30, 2013, Terraria 1.2 introduced a number of new features and balances, such as:

Released on June 30, 2015, Terraria 1.3 introduced a new endgame, as well as a number of extra features:

Released on May 16, 2020 (nine years after the launch of Terraria), Journey's End is the final major update for Terraria, as well as the largest in the game's history. Some of the features the update introduced are: 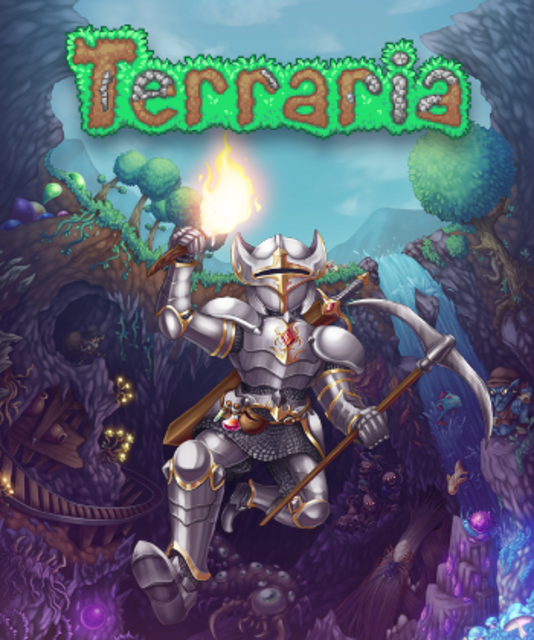