The Legend of Zelda: A Link to the Past & Four Swords

Four Swords is the multiplayer component of the game for two to four players, there is no single player mode for this story so a game link cable is required if you want to play. Unlike in Four Swords Adventures it is not required that there be four Link's, if only two people are playing then the game will make sure that there are no impossible puzzles that require more over two players for example. When you start the game player one is the green Link, two is the red, three is blue and four is purple. In this game there is not an option for you to name your character, he is auto-assigned the name of Link. There are 3 levels each with two stages and a boss stage and then there is a final Vaati boss level that will unlock after you have completed the original 3 levels. In order to complete levels you must make sure you collect enough Rupees, if any of the players die you will collectively lose 50 Rupees and this amount increases each time a player is revived. The player is rewarded if he finishes a stage with the most rupees and also a player gains a heart container if he is the first to reach the portal at the end of the level. The gameplay is very unique as it does not feature an overworld and unlike in Four Swords Adventures the dungeons are randomly generated so that the enemies are never in the same place. The player who does the best on a stage will be awarded the medal of courage which is needed to unlock a secret technique in the Link to the Past portion of the game.

The first time you play through the game you will need to collect 1000 rupees to complete each stage, after you have completed the stage the players will be awarded with silver keys. Once you have the silver keys you can opt to play harder versions of the stages which require 3000 rupees per stage, if you can make it through these stages you will unlock the gold keys. Now you have the gold keys you can play through once more, this time you need to collect 5000 rupees a level and there is 4 boss battles on Vaati's stage instead of one. Each time you play through the game you get a different ending so if you want to see all of them you will need to play the game to completion at least 3 times.

The game takes place many years after the events at the end of Minish Cap and many years before Four Swords Adventures. You are told a legend of a young boy who managed to defeat a powerful magic wizard called Vaati through the use of a magical blade referred to by the villagers as the Four Sword. Legend has it that when the boy defeated Vaati he trapped his soul within the sword, Zelda was assigned the task of guarding this sword. Villagers would ask how a boy could beat such a mighty villain and they would tell tales that the blade could create four duplicate copies of the user. When there is strange happenings and disturbances at the shrine, Zelda calls on Link to help her investigate these peculiar happenings. Zelda warns Link not to touch the blade but as she does this Vaati breaks free from his prison, steals the princess away to make her his bride and knocks Link unconscious. When Link awakens he is greeted by three fairies who instruct him to draw the blade and split in to four, they inform him that to gain access to Vaati's palace Link must collect rupees scattered across Hyrule to prove his courage to the great fairies, if he can do this they will grant him keys to the palace. Once Link manages to gain access to the palace he will do battle with Vaati and once again seal him within the sword, after he has rescued Princess Zelda he will return the sword back to the sanctuary and become his original self again.

During Nintendo's E3 2011 press conference they revealed that in honor of Zelda's 25th anniversary the Four Swords game that was apart of A Link to the Past's GBA re-release would be available for download, for free, on DSiWare for Fall 2011. The game was reworked to include a singleplayer mode including new enemies, maps, and puzzles. The game was released on September 29, 2011. 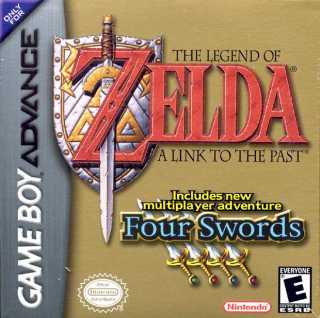